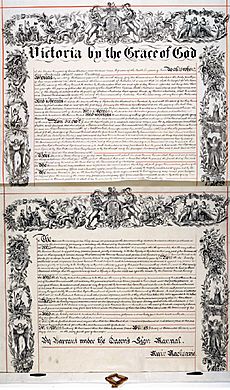 Letters patent issued by Queen Victoria in 1900, creating the office of Governor-General of Australia as part of the process of Federation

Letters patent (always in the plural) are a type of legal instrument in the form of a published written order issued by a monarch, or government. They are generally used in granting an office, right, monopoly, title, or status to a person or corporation. Letters patent can be used for the creation of corporations or government offices. They may be used for the granting of city status or a coat of arms. Letters patent are issued for the appointment of representatives of the Crown, such as Governors and Governors-General of Commonwealth realms. In the United Kingdom they are also issued for the creation of peers of the realm. A particular form of letters patent has evolved into the modern patent (referred to as a utility patent or design patent in United States patent law). This grants exclusive rights of an invention (or a design in the case of a design patent). In this case it is essential that the written grant should be in the form of a public document so other inventors can consult it to avoid infringement. It is also important to understand how to "practice" the invention or put it into practical use.

The opposite of letters patent are letters close. These are personal in nature and sealed so that only the recipient can read their contents. Letters patent are comparable to other kinds of open letters in that their audience is wide.

All content from Kiddle encyclopedia articles (including the article images and facts) can be freely used under Attribution-ShareAlike license, unless stated otherwise. Cite this article:
Letters patent Facts for Kids. Kiddle Encyclopedia.