Lilyana Ivanova Petrova (Bulgarian: Лиляна Иванова Петрова, born April 24, 1939 in Kubrat), known professionally as Lili Ivanova (Bulgarian: Лили Иванова) is a Bulgarian singer. In tribute to her contribution to the culture of the country, she is often referred to as the "Prima of Bulgarian popular music" Since 1961 she has developed continuous performing and concert activities, recorded songs and albums, made media appearances, participated in television programs, and made videos.

Lili Ivanova was born on April 24, 1939 in the small town of Kubrat. She graduated from the nursing school in Varna and worked as a nurse for a very short time. She stated in an interview that she has Romanian roots on her maternal side. Her career as a singer begins in the early 1960s. She achieved recognition in 1963 as a singer with the variété show at Ambassador Hotel and the Constantin Tanase Music Hall Theatre in Bucharest. The local audience adored the rising star and the local television broadcast 4 live shows. Her first album "Amore Twist" was recorded in the same year. Her second album "Sea of Youth" was recorded in Bulgaria in 1967 and contains 11 songs. Her third album was recorded in Moscow in 1968 [Поет Лили Иванова (Lili Ivanova singing), Melodia, 1968]. Ivanova's album "Camino" was recorded by the Bulgarian Balkanton in 1968. The singer is still performing the Camino song, as it allows for the full broad spectrum of her voice.

Ivanova wins her first prize "Golden Key" in 1966 in Bratislava, Czechoslovakia. In the years that follow she receives over 10 international awards and numerous local recognitions. In 1997, the International Women association nominated Ivanova as one of the most famous women of the 20th century. In 1999 Ivanova was awarded the highest Bulgarian State Award, "Stara Planina" medal, for her contribution to the Bulgarian pop music.

In 2000, she scored the biggest hit of her career – the song "Winds". In the years to come Ivanova performs in the biggest concert and events hall in Bulgaria, at the National Palace of Culture. On January 9, 2009 she achieves the highest honour for every singer – to performs at Olympia Hall in Paris. The singer herself continues to prove that she is capable of mastering different musical styles. She has formed several own bands during her long singing career occasionally changing her style. 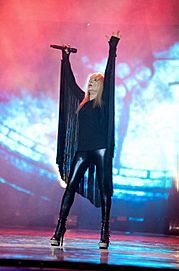 Ivanova started her career singing popular Italian, French and Russian hits. The singer's music style is distinctive, having strong meaningful lyrics and memorable tunes. Her music from the 1960s and 1970s was marked by complex and rich orchestrations, dramatic transitions between quiet and loud moments, often played with a brass band, string orchestra and electric guitars, with accents of piano or Hammond organ, backing vocals (sometimes choral) and a reverberation to the voice of the performer. Subsequently, with the style going out of fashion, the singer began performing music composed with electronic musical instruments. Since 2000 Ivanova has been accompanied at her live performances by several musicians – mainly pianist, violinist, guitarist and a saxophonist. The singer has repeatedly stated the importance of the songs' lyrics and the message they convey to the public. Throughout her career she has shown interest in experimenting with new sounds and has expanded her repertoire with compositions in rock, soul, rhythm and blues, Balkan ethno and jazz.

Ivanova has recorded and released 35 albums and 29 singles altogether in Bulgaria, USSR, Romania, Turkey, Germany, Spain and other countries. There aren't exact statistics on the number of sold copies of her albums. According to Alexander Yosifov, ex-director of Balkanton from 1968 to 1986, Ivanova's albums in store for the Soviet Union always reached a circulation of over 1 million. The Italian Magazine L'Europeo stated that she has sold more than 10 million copies in the USSR. However, due to the Socialist system in Bulgaria, she has never received any income from the sales of the records, beside a monthly salary equal for all famous singers at that time.

Ivanova has had over 11,000 concerts and many tours abroad, mainly in the former USSR (and Russia in the 1990s). She has also performed in Germany, Cuba, Japan, Turkey, the Czech Republic, Yugoslavia, Hungary, Poland, Greece, Portugal, Brazil, etc. as well as several tours in the US and Canada singing for Bulgarian immigrants there.

Ivanova was awarded with a golden vinyl plate from Balkanton for selling 2 million albums for a year (there are only 5 such golden plates in Bulgaria). She returned it back publicly in an act of a protest after Balkanton lowered the criteria for getting such a recognition in 1990.

All content from Kiddle encyclopedia articles (including the article images and facts) can be freely used under Attribution-ShareAlike license, unless stated otherwise. Cite this article:
Lili Ivanova Facts for Kids. Kiddle Encyclopedia.