Linda Wolf (born March 17, 1950) is an American photographer and author. She is one of the first female rock and roll photographers. Wolf also makes fine art photography with an emphasis on women and global photojournalism.

Wolf was born in Los Angeles, California, on March 17, 1950 and raised in Sherman Oaks, California. Her mother, Barbara Wolf (née Friedman), is a poet and was a fashion model and English literature teacher at Beverly Hills High School. Her father, Joseph Wolf was a businessman and avid photographer. Wolf's interest in photography was born out of her father's passion for photography and he bought her first camera for her when she was a teenager.

Wolf attended Hollywood High School and graduated in 1968. In 1969, she began dating Sandy Konikoff, the drummer for Jackson Browne and he invited her to live at Paxton Lodge in the Sierra Nevada Mountains, where Elektra Records was recording one of Browne's first albums. There was a dark room at the studio and she was inspired by the experience and made a decision to pursue photography professionally. Wolf's grandfather, Jules Wolf, managed the historic Lincoln Theater, often called the Apollo of the West.

In 1969, Wolf began working at Warner Bros./Reprise Records where she met the first all-girl rock band to sign with a major record label, Fanny (band). They became friends, and she moved in with the group at Fanny Hill, a mansion on Marmont Lane in Hollywood, where she lived for a year and a half as the band's documentary photographer. It was during her stay at Fanny Hill that she met Lowell George and band members from Little Feat and began photographing them, as well. 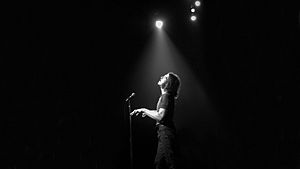 Joe Cocker, Photographed by Wolf in 1970 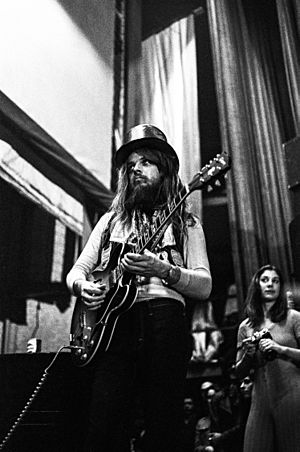 Wolf met Joe Cocker a week before the Joe Cocker: Mad Dogs & Englishmen tour began. Cocker had just arrived in the U.S. and was staying with his roadie and keyboard player at Leon Russell's house. His record label informed him that he was to start a U.S. tour in six days but he had just recently broken with his band, The Grease Band. Leon Russell offered to quickly assemble a touring band and recruited over 40 of his friends. Denny Cordell, who produced the tour, invited Wolf along after seeing her photography. She and Andee Nathanson were the two official photographers for the two month U.S. concert tour which included Leon Russell, Rita Coolidge, Chris Stainton, Claudia Lennear, Bobby Keys, Pamela Polland, Matthew Moore, plus musicians representing the Tulsa Sound including Carl Radle, Jim Keltner, and Chuck Blackwell.

The music documentary, Joe Cocker: Mad Dogs & Englishmen, was released in 1971 and credited Wolf for her tour photography in the film.

Wolf authored Joe Cocker: Mad Dogs & Englishmen: A Memory Book, which included over 150 new photographs, quotes and stories from alumni, released in 2015 at the Lockn' Festival.

On September 11, 2015, Wolf joined the Tedeschi Trucks Band & Friends plus alumni from the 1970 Mad Dogs & Englishmen Tour, as the official photographer, and sang in the encore with the Space Choir, for a tribute concert to honor Joe Cocker and the Mad Dogs and Englishmen music. Participating alumni included Leon Russell, Rita Coolidge, Claudia Lennear, Chris Stainton, Pamela Polland and others including Wolf.

Cocker died on December 22, 2014 and Wolf's photographs were used in articles written about his life and music legacy by the Associated Press.

Wolf's photographs are in the collection of the:

Her photography was included in the Multicultural Focus exhibition at the Los Angeles Municipal Art Gallery, in Barnsdall Park. In 2012, the 12 artists from the original Los Angeles Municipal Art Gallery, were brought back together to show new work at the Arena 1 Gallery: Refocus: Multicultural Focus: an initiative of the J.Paul Getty’s Pacific Standard Time.

Wolf conceived and co-curated the 2017 Women in Photography Exhibit at the Bainbridge Island Museum of Art where many of her own photographs were exhibited.

Wolf was a featured guest on the KNBC/PBS series Talk About Pictures, in 1981.

In the late 1970s and early 1980s, Wolf created a public art project of bus bench murals consisting of photos of ordinary people sitting on bus benches. The photographs were placed on the sides of buses and the back of bus benches in Los Angeles, San Diego, and Oakland, CA, and Arles, France. One of the bus benches sits in the courtyard of Musée Réattu as part of their permanent collection, in Arles France. The benches were conceived as a response to the dehumanizing effects of advertising, and were exhibited in numerous venues including the Los Angeles Municipal Art Gallery and the Rencontres International Festival of Photography in Arles, France.

Wolf then developed the project, "L.A. Welcomes the World", a series of large-scale multicultural portraits of people presented on billboards throughout Los Angeles, for the 1984 Summer Olympics, which was sponsored by Eastman Kodak.

Contributions to Published Books and Films:

Wolf graduated from Hollywood High School in 1968. From 1970–1975, she lived and studied in Provence, France, attending the Institute of American Universities, and L'Ecole Experimental Photographic. Her early photographic work in France focused on people and village life in the Vaucluse Mountains. Upon returning to the US, Wolf attended Evergreen State College in Olympia, Washington. She taught photography through the University of California at Los Angeles Extension and worked as a staff photographer for the Los Angeles Citywide Mural Project.

All content from Kiddle encyclopedia articles (including the article images and facts) can be freely used under Attribution-ShareAlike license, unless stated otherwise. Cite this article:
Linda Wolf Facts for Kids. Kiddle Encyclopedia.