Linton is a city in Stockton Township, Greene County, Indiana, United States. The population was 5,413 at the 2010 census. A coal mining city, it is located southeast of Terre Haute. The current mayor is John Wilkes.

Linton is part of the Bloomington, Indiana, Metropolitan Statistical Area.

Linton was essentially founded around the entrepreneuring of John W. Wines, who first sold goods in the Linton area, briefly in 1831. Although he would later relocate to Fairplay, Indiana, he returned and opened a general store in Linton in 1837. He would later build a small horse mill as well as a tannery. The city itself was officially chartered and named in June 1850, laid out by Hannah E. Osborn and Isaac V. Coddington. In the late 19th century, small underground coal mines began to appear near and almost inside the city and the population expanded rapidly. At the turn of the 20th century, the population was larger than it is today. At one point in the 1920s, there were at least 35 drinking establishments and an equal number of churches.

In the 1920s, small surface mines began to predominate, and their small, unreclaimed hills and strip-pit lakes still surround the city. The lakes have provided a regular, if limited, amount of fishing tourism for decades. Signs of the underground mines remain as well, including tipples on private land and sinkholes that appear regularly on private property, roads and even within the city limits. By the 1940s, the underground mines were gone and the small surface mines had moved on or been consumed by large corporations such as Peabody Coal Company. These mines were the primary employers well into the 1980s.

In 1952, General Electric built a factory on the southeast side of the city. This factory employed several hundred until the mid-1980s, when General Electric phased out most of their small motors production in the U.S. The building remains empty due to EPA regulations. In 2014, GE began to tear down the factory, which is now gone. The company won't be selling the land back to the city, but selling the land to buyers, themselves.

The Linton Commercial Historic District and Linton Public Library are listed on the National Register of Historic Places. 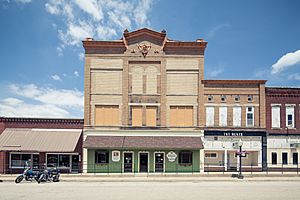 There were 2,325 households of which 29.6% had children under the age of 18 living with them, 44.0% were married couples living together, 12.5% had a female householder with no husband present, 5.6% had a male householder with no wife present, and 37.9% were non-families. 33.8% of all households were made up of individuals and 16.7% had someone living alone who was 65 years of age or older. The average household size was 2.30 and the average family size was 2.88.

There were 2,450 households out of which 28.1% had children under the age of 18 living with them, 48.7% were married couples living together, 10.0% had a female householder with no husband present, and 37.7% were non-families. 34.5% of all households were made up of individuals and 18.6% had someone living alone who was 65 years of age or older. The average household size was 2.26 and the average family size was 2.87.

The tagline for the Linton Music Festival is "Mayberry meets Woodstock." In 2010, over 12,000 people attended. The festival prides itself in being a free event that offers entertainment for all ages and musical tastes. The festival operates as a non-profit entity that strives to promote the musical arts, economic development, and tourism. It is funded in part by grants from the Indiana Arts Commission and corporate sponsors (DIRECTV, Linton Family Pharmacy, and Node 1 Technology among others). The Linton Music Festival (LMF) is held annually on the Friday, Saturday, and Sunday prior to Labor Day. 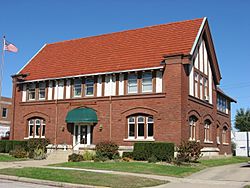 Linton has been celebrating Independence Day since 1905. Events include the largest Independence Day parade in Indiana-bringing over 40,000 people to this city, a week-long visit from a traveling carnival, local music and entertainment, and fireworks on the Fourth of July.

This festival, beginning in 2010, celebrates the wildlife contained in the Goose Pond Fish and Wildlife Area. Goose Pond is a wetlands reclamation project south of the city, which has had some success at restoring marginal farmland to its natural condition. The goal is to encourage hunting, fishing and naturalist excursions.

Linton is one of the teams that plays against Hickory High in the motion picture Hoosiers.

All content from Kiddle encyclopedia articles (including the article images and facts) can be freely used under Attribution-ShareAlike license, unless stated otherwise. Cite this article:
Linton, Indiana Facts for Kids. Kiddle Encyclopedia.