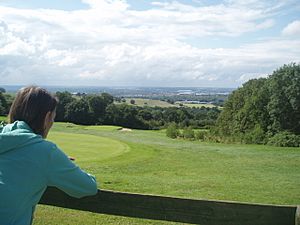 Lippitts Hill is a hill located at High Beach, Epping Forest, Essex. It has played several historic roles in the defence and policing of London.

The hill was the site of a gun emplacement in the First World War and used as an anti-aircraft site in the Second World War. The United States's 184th anti-aircraft artillery installed their own guns in 1941, and added an underground control room and block houses to the site. A prisoner of war camp was established at Lippitts Hill by the British after the camp was abandoned by the Americans in 1944. Relics from the Second World War at the camp include a memorial to the American forces that served there, and a concrete sculpture of a man, left by a German prisoner of war, Rudi Webber. The local branch of the Peace Pledge Union, a pacifist organisation, would invite local prisoners of war from the camp to their homes on Christmas Day.

All content from Kiddle encyclopedia articles (including the article images and facts) can be freely used under Attribution-ShareAlike license, unless stated otherwise. Cite this article:
Lippitts Hill Facts for Kids. Kiddle Encyclopedia.