This is a comprehensive list of rolling stock of the Isle of Wight Steam Railway at Havenstreet, Isle of Wight.

Havenstreet currently boasts a surplus of ex. Wight railway network stalwarts & industrial tank engine designs. More are being restored all the time, covering for other locomotives as they themselves are taken out of service. In the near future, additional classes from the mainland may be brought in for when the railway expands its operations.

Three diesel shunters are currently in the custody of the railway, all of which have run a majority of service trains, as opposed to the usual steam-hauled passenger services. 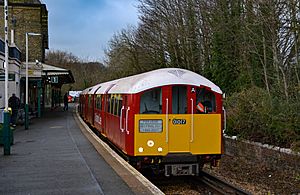 The British Rail Class 483 unit No.483007, named "Jess Harper," was transferred from the Island Line to the Isle of Wight Steam Railway in 2021 for static display in the carriage shed at Havenstreet Station. The train, built in 1940 as London Underground 1938 Stock, could potentially be converted to battery power and returned to traffic in the future.

All of the railway's operational coaches have been built to a pre-grouping design. These have been restored by the skilled Havenstreet staff and are the envy of many Southern Region preserved railways.

The stock collection currently has six coaches of the former LB&SCR, the earliest built in 1896.

The London, Chatham and Dover Railway's role in the south of England ensured an ample collection of stock for the owning groups.

An amalgamation of LC&DR and SER, the South Eastern and Chatham Railway also contributed to the Island Line's working stock.

The Railway has complete SR Vans stored ready to be used as donor vehicles, or are currently operational on the railway.

Cranes and other special use wagons

All content from Kiddle encyclopedia articles (including the article images and facts) can be freely used under Attribution-ShareAlike license, unless stated otherwise. Cite this article:
List of Isle of Wight Steam Railway locomotives and rolling stock Facts for Kids. Kiddle Encyclopedia.