List of National Monuments in Ulster facts for kids 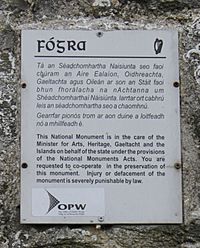 Photo of a typical Notice (Irish: Fógra) at a National Monument in the Republic of Ireland. Only three of Ulster's nine counties lie within the Republic. The other six counties make up Northern Ireland.

The Irish state has officially approved the following List of National Monuments of Ireland. In the Republic of Ireland, a structure or site may be deemed to be a "National Monument", and therefore worthy of state protection, if it is of national importance. If the land adjoining the monument is essential to protect it, this land may also be protected.

This list is initially sorted by county. If the list is sorted under another heading, the county links above will take you to the first item from the county in the sorted list

All content from Kiddle encyclopedia articles (including the article images and facts) can be freely used under Attribution-ShareAlike license, unless stated otherwise. Cite this article:
List of National Monuments in Ulster Facts for Kids. Kiddle Encyclopedia.