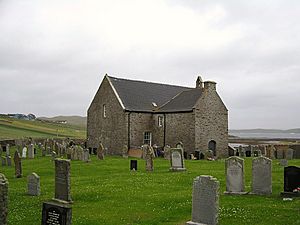 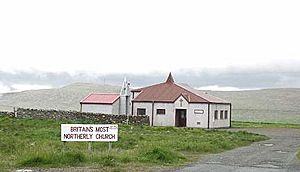 Haroldswick Methodist Church, the most northerly church building in the UK 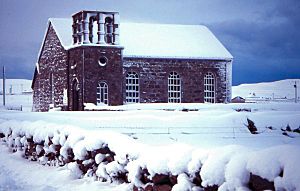 The Reformation reached Shetland in 1560. This was an apparently peaceful transition and there is little evidence of religious intolerance in Shetland's recorded history. A variety of different religious denominations are represented in the islands.

The Church of Scotland has a Presbytery of Shetland. 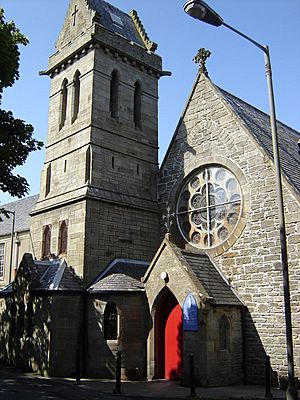 Shetland is part of the Diocese of Aberdeen and Orkney of the Scottish Episcopal Church.

Shetland is part of the Roman Catholic Diocese of Aberdeen. There is only one Catholic Church in Shetland, located in Lerwick. However, Mass is said in other places, using other places of worship belonging to other Christian groups on an occasional basis.

All content from Kiddle encyclopedia articles (including the article images and facts) can be freely used under Attribution-ShareAlike license, unless stated otherwise. Cite this article:
List of churches in Shetland Facts for Kids. Kiddle Encyclopedia.