Unst ( Scots: Unst) is one of the North Isles of the Shetland Islands, Scotland. It is the northernmost of the inhabited British Isles and is the third-largest island in Shetland after the Mainland and Yell. It has an area of 46 square miles (120 km2).

Unst is largely grassland, with coastal cliffs. Its main village is Baltasound, formerly the second-largest herring fishing port after Lerwick and now the location of a leisure centre and the island's airport. Other settlements include Uyeasound, home to Greenwell's Booth (a Hanseatic warehouse) and Muness Castle (built in 1598 and sacked by pirates in 1627); and Haroldswick, location of a boat museum and a heritage centre.

There are three island names in Shetland of unknown and possibly pre-Celtic origin: Unst, Fetlar and Yell. The earliest recorded forms of these three names do carry Norse meanings: Fetlar is the plural of fetill and means "shoulder-straps", Ǫmstr is "corn-stack" and í Ála is from ál meaning "deep furrow".

However, these descriptions are hardly obvious ones as island names and are probably adaptations of a pre-Norse language. This may have been Pictish but there is no clear evidence for this. Taylor (1898) has suggested a derivation from the Old Norse "Ornyst" meaning "eagle's nest". 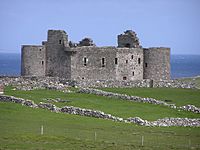 The Shetland Amenity Trust's "Viking Unst" project excavated and displayed part of the island's Norse heritage. Work was undertaken on three longhouses – of which 60 are known of on the island – at Hamar, Underhoull and Belmont. The replica Viking ship Skibladner can currently be seen ashore at Haroldswick.

The remains of pre-12th-century Christian chapels survive on Unst: St Olaf's Chapel, Lund, and Our Lady's Kirk at Framgord, Sandwick on the south east coast. Norse-style cross-shaped gravestones stand in the surrounding burial grounds at both Lund and Framgord, and rare "keelstone" burial markers survive at Framgord. Late Norse longhouses have been identified around both bays; the house at Sandwick still retains its cow-shaped byre door. 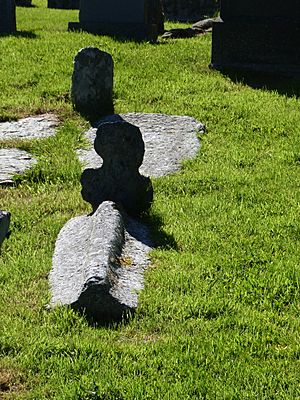 Small cross-shaped marker with a grave stone shaped like the keel of an inverted ship at the late-Norse Christian Chapel at Framgord, Sandwick

James Hepburn, 4th Earl of Bothwell sailed to Shetland after the Battle of Carberry Hill. He was at the house of the receiver or sheriff of Shetland on Unst in July 1567 when his enemies arrived in three ships, and he fought a sea battle for three hours before sailing to Norway. A later sheriff, Laurence Bruce, built Muness Castle in 1598.

The Rev Dr James Ingram (1776-1879) was minister of Unst from 1821. In the Disruption of 1843 he, and most of the Unst population, left the established church and joined the Free Church of Scotland (a very typical pattern in the Highlands and Islands). He erected a new church at Uyeasound, funded by the Countess of Effingham. Ingram retired in 1875 aged 99 and died aged a remarkable 103. His father and grandfather also lived to over 100.

Robert Louis Stevenson's father and uncle were the main design engineers for the lighthouse on Muckle Flugga, just off Hermaness on the north-west of the island. Stevenson visited Unst, and the island is claimed to have become the basis for the map of the fictional Treasure Island – a claim shared by Fidra in East Lothian.

In the 1950s a Canadian sociologist, Erving Goffman, undertook a year of ethnographic research on Unst for his doctoral thesis, which underpinned his best known publication, The Presentation of Self in Everyday Life (1956), and the dramaturgy approach he developed.

On 7 January 2007, Unst was rocked by an earthquake measuring 4.9 on the Richter scale, which is believed to have been one of the most powerful earthquakes in the Norwegian Sea area in the past 10 years.

Western Norway is 300 km away.

The islands of Unst and Fetlar are mainly formed of ultramafic and mafic igneous rocks which are interpreted to form part of an ophiolite, a section of oceanic crust from the Iapetus ocean which was destroyed during the Caledonian orogeny.

Unst was once the location of several chromite quarries, one of which was served by the now-disused Hagdale Chromate Railway from 1907 to 1937. Unst is the type locality for the mineral theophrastite, a nickel-magnesium variant of the mineral, (Ni,Mg)(OH)2, having been discovered at Hagdale in 1960. 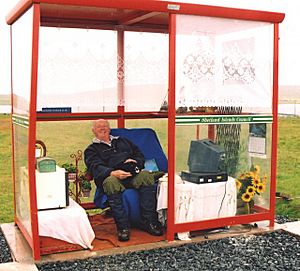 Ferries link Belmont on the island to Gutcher on Yell and Oddsta on Fetlar.

The Unst Bus Shelter, also known as Bobby's Bus Shelter after a child who saved it from removal, is a bus shelter and bus stop near the village of Baltasound which is equipped with home comforts such as a television set, and is maintained by local residents.

Unst is also home to the Promoting Unst Renewable Energy (PURE) Wind Hydrogen project, a community-owned clean energy system based on hydrogen production. This project is part of the Unst Partnership, the community's development trust. The Pure Energy Centre was formed using the skills and knowledge gained during the PURE Project and has installed hydrogen systems in diverse locations.

At the southern end of Unst, above the island's ferry terminal, stands Belmont House. Dating from 1775, Belmont has been described as "possibly the most ambitious, least-altered classical mansion in the Northern Isles." It was restored between 1996 and 2010 by a charitable trust, who now operate the building as a venue for hire.

In 2016 the island was the subject of Series 11 of BBC Two's An Island Parish.

The Saxa Vord Royal Air Force radar station closed in 2006, with the loss of more than 100 jobs.

In April 2007 RAF Saxa Vord's domestic site, plus the road up to the Mid Site, was purchased and renamed "Saxa Vord Resort" by Highland entrepreneur Frank Strang. Strang's company Military Asset Management (MAM) "specialises in the regeneration of redundant or surplus Defence Assets". The base was converted to a tourist resort and natural and cultural heritage centre. In 2013 Saxa Vord had self-catering holiday houses, a 26-bedroom bunkhouse, restaurant and bar, leisure facilities and a guided walks/evening talks programme. Three local business relocated their premises to the Saxa Vord site: Unst Cycle Hire, Valhalla Brewery and Foord's Chocolates, Shetland's only chocolatier.

In 2017 Frank Strang established the Shetland Space Centre Ltd and proposed that Lamba Ness would make a suitable launch site for rockets taking satellites into polar orbits. In October 2020 the proposal was given more substance by the announcement that the UK Space Agency had given its approval and that Lockheed Martin was intending to use the site as a UK base for its rocket launches. In January 2021, plans were submitted for three rocket launch pads.

Unst is important for its seabird colonies, including those at Hermaness National Nature Reserve. It is also known for its plant life, including the Norwegian sandwort and Shetland Mouse-ear, the latter unique to the island.

On the island, the commonly seen Great skua is known as the "bonxie".

All content from Kiddle encyclopedia articles (including the article images and facts) can be freely used under Attribution-ShareAlike license, unless stated otherwise. Cite this article:
Unst Facts for Kids. Kiddle Encyclopedia.