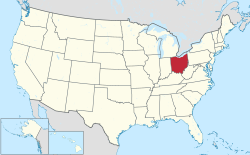 Map of the United States with Ohio highlighted

Cities in the U.S. state of Ohio are incorporated municipalities whose population is greater than 5,000. Smaller municipalities are villages. Nonresident college students and incarcerated inmates do not count towards the city requirement of 5,000 residents. There are currently 247 municipalities in Ohio considered to be cities in Ohio.

Municipality names are not unique: there is a village of Centerville in Gallia County and a city of Centerville in Montgomery County; there is also a city of Oakwood in Montgomery County as well as the villages of Oakwood in Cuyahoga County and Oakwood in Paulding County. Bay Village and The Village of Indian Hill are cities despite the word "Village" in their names, and 16 villages have "City" in their names.

Largest cities in Ohio by population 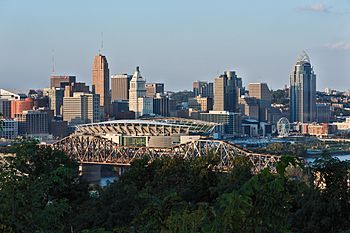 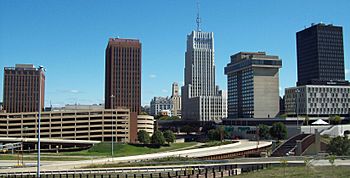 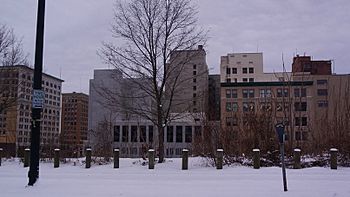 All populations are those of the 2010 United States Census.

All content from Kiddle encyclopedia articles (including the article images and facts) can be freely used under Attribution-ShareAlike license, unless stated otherwise. Cite this article:
List of cities in Ohio Facts for Kids. Kiddle Encyclopedia.