List of city parks of Erie, Pennsylvania facts for kids

This is a list of the city parks and playgrounds of Erie, Pennsylvania. Those annotated with a ward affiliation are "officially named, designated, established, and located as public parks, public parks and playgrounds, and public playgrounds of the city." Also included here are selected parks operated by the Erie City School District and nearby Millcreek and Harborcreek townships. Erie County no longer operates parks, having passed all of its holdings to local governments.

The Erie Times-News discussed the city parks in their entirety in "City Boasts Dozens of Parks" on 4 June 2000. The city has 56 city parks, which includes:

The same article ranked the parks for various characteristics:

The City of Erie coordinates management of a number of city parks with commercial and public stakeholders interested in green space and what it means for quality of life and the economy. Major parks like Frontier Park and Perry Square have advocacy groups with formal relationships linking the city, the public, and corporate sponsors. Other parks, like McClelland Park, Washington Park, and Woodland Avenue Park are supported by neighborhood groups that seek development funds and advocate for their local community parkland. The mayor is planning a formal adopt-a-park program to recognize all non-governmental efforts to maintain city parks. The city also integrates city park improvements into city development projects, such as the major renovation underway involving Griswold Park near Union Station. 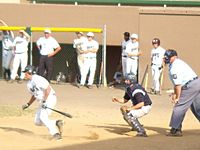 The Ainsworth Athletic Field was dedicated on 25 August 1947 in honor of J. C. Ainsworth "in appreciation of his outstanding accomplishments as civic leader, physical director, friend, and counselor of the youth of this community." It was rededicated in 1980 by the Erie City School District, which continues to provide funding for the stadium. Hallgren, Restifo, and Loop were the architects for the 1980 renovations, while Eriez Construction was the general contractor.

Half a dozen fields are available for children's soccer leagues, picnicking, and other activities. Six lit tennis courts and a children's playground are enjoyed along West 6th Street, where off-street parking holds approximately two dozen vehicles. Paved walks make a circuit of the park and include two crossings of the west branch of Cascade Creek. Joggers, bikers, and pedestrians on these paths can explore both flat and hilly terrain, lawn areas and reedy swamps, and a deep woods tree canopy and open spaces. A bike path connects Frontier Park to the Bayfront bikeway. Plans are afoot for an ice rink.

The Lake Erie Arboretum at Frontier Park (LEAF) was dedicated on 8 September 2001, after four years of local planning, fund raising, and planting. The LEAF program includes over 225 species of trees in an arboretum, what organizers nickname a tree museum. Dan Dahlkemper, owner of Dahlkemper Landscape Architects and Contractors, was the landscape architect for the project. An amphitheater with four stony rows of seating for approximately 75 persons is embedded in a wooded hillside not far from West 6th Street. The amphitheater is called the Patricia McCain Outdoor Classroom. The Labyrinth at LEAF was added to the park in 2005. (Ward 4)

The park is named for Matthew Griswold, US Congressman and part owner of Erie's Selden and Griswold Manufacturing Company, famous maker of now-collectible cast iron skillets.

Griswold Plaza, which is on the northwest corner of the park, was dedicated in 1930 to Griswold's son, Matthew Griswold, Jr, who served as General Manager of the Erie works of the General Electric Company. The son, who headed the dedication of the neighboring park three years earlier, died in the interim and was memorialized by the city.

The park contains a cast-aluminum marker honoring the famous magician Harry Kellar, whose childhood home was situated near the park. The marker, placed by the Pennsylvania Historical and Museum Commission and the Erie Art Museum, was dedicated on May 9, 2008.

The Erie Redevelopment Authority plans a $51 million urban renewal project to construct 143 new residential units in the four blocks between State Street, Sassafras Street, West 12th Street, and West 14th Street, including up to fourteen town houses along Peach Street and West 13th Street, which each bisect the area. The one-acre park, a feature of the new neighborhood, will be extended and better lit as a result of the project, which is expected to begin in the summer of 2008. Gardens and water will be added, while a gazebo that has attracted the homeless will be relocated to a different park.

The park hosted the Erie Farmers' Market from its inception in 2004 through the summer of 2007, after which the market was moved to Perry Square due to the above construction. Regional farmers pay a one-time fee to sell their produce weekly during the summer months. (Ward 3)

The city was cited in 1990 and again in 1997 for dumping road sweeper waste on the property, in violation of the Project 70 Act, so an ordinance was added to the city code in 1997 prohibiting same. While the city no longer dumps in the park, some city residents use the park margins instead of city services to dispose of yard debris and old Christmas trees. 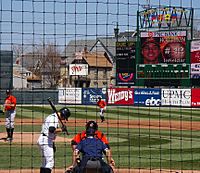 All content from Kiddle encyclopedia articles (including the article images and facts) can be freely used under Attribution-ShareAlike license, unless stated otherwise. Cite this article:
List of city parks of Erie, Pennsylvania Facts for Kids. Kiddle Encyclopedia.