This is a list, which includes a photographic gallery, of some of the remaining structures and monuments, of historic significance in Cave Creek, a town in Maricopa County, Arizona. Cave Creek was first inhabited by the ancient Native-American tribe known as the Hohokam. The area, which later belonged to Mexico, was ceded to the United States and was within what was known as the United States Territory of Arizona. In 1986, The Town of Cave Creek was incorporated. Some of the structures are listed in the National Register of Historic Properties.

Cave Creek and the surrounding area was inhabited by the members of the Hohokam Indians. Hohokam is a Pima (O'odham) word used by archaeologists to identify a group of people who lived in the Sonoran Desert of North America. The Hohokam may have been the ancestors of the historic Akimel O'odham (Pima) and Tohono O'odham peoples in Southern Arizona. The reason for which the Hohokam abandoned the area is unknown. The Tonto Apaches claimed the land.

In October, 1870, Major General George S. Stoneman, came upon the area where the future town of Cave Creek was to be established. Stoneman was the commanding officer of the U.S. Cavalry stationed in Camp McDowell (later renamed Fort McDowell) in what was then the United States Territory of Arizona. Stoneman was looking for a trail which would serve as a short cut between Camp McDowell and Fort Whipple in Prescott, Arizona. He investigated an old Native-American trail and found an area bordering a flowing creek with bubbling springs. The trail was named the “Stoneman Military Trail” and the area “Cave Creek”. Soon, Anglos began to settle the area and by 1877, a married couple by the names of Jeriah and Amanda Wood established the “Cave Creek Station”. The station was a lodge where travelers could dine and stay overnight. 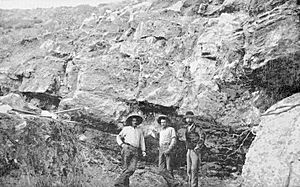 In 1873, Cave Creek established the Cave Creek Mining District in an area which covered 144 square miles. William Rowe located a rich gold mine on Gold Hill in 1874. This attracted miners and settlers to the area. The first recorded gold mine in the area was called the Continental. Another mine called the Golden Reef Mine was established. In 1880, the Golden Reef Stamp Mill was built in California and sent to Cave Creek. The mine also had a tramway car system on its grounds. The invasion of new settlers to the area irritated the Tonto Apaches. This was one of the factors which played a role in what became known as the "Cave Creek Ambush". In 1882, the last skirmish of the Apache Wars between the 5th U.S. Cavalry, under the command of Lt. Walter S. Schuyler, and the Tonto Apaches was fought in Cave Creek. The Golden Reef Mine closed in 1993 and both the stamp mill and tramway car were donated to the Cave Creek Museum. 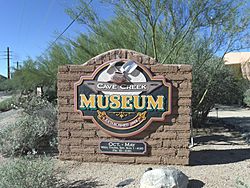 The land south of the Black Mountain was opened in 1920 for homesteading. The climate of the area was considered favorable for those who suffered of tuberculosis and soon tuberculosis cabins were built in Cave Creek. Located on the grounds of the Cave Creek Museum is a Tubercular Cabin, which is listed in the National Register of Historic Places. The cabin was one of the cabins belonging to the Desmount Sanitarium, built in 1920. The Cave Creek Museum was opened in 1970 by the Cave Creek historical society. The society was established in 1968. Also among its outside exhibits are the First Church of Cave Creek, which was built in 1947; the Golden Reef Stamp Mill and the Cave Creek Bandshell which was built in 1900 and originally located in downtown Cave Creek. The museum also has an Arrastre, which in Spanish means "to drag". The Arrastre, a crude crushing mill run by burro or oxen, was built in 1900.

Other properties and artifacts

Cave Creek's preservation office does not have the ability to deny a demolition permit. Therefore, the owner of a property, listed either in the National Register of Historic Places, may demolish the historical property if he or she so wishes. According to Jim McPherson, Arizona Preservation Foundation Board President:

"It is crucial that residents, private interests, and government officials act now to save these elements of our cultural heritage before it is too late.”

There are various historic properties and artifacts in the town of Cave Creek. Two of the historic properties have been converted into restaurants. They are the Cave Creek Inn and the Cave Creek Service Station. The Cave Creek Inn was built in 1920 and is Cave Creek’s longest operating commercial building. It is now occupied by a restaurant. The Cave Creek Service Station was built in 1925. It was listed in the National Register of Historic Places in 2000. Frontier Town, located in 6245 E. Cave Creek Rd., has some of Cave Creeks original structures. It is also pictured. Among the historic structures in the “town” is the former Leather Mill building which was built in the late 1880s and is one of the original extant buildings in Cave Creek. Also, a 1936 Works Progress Administration (WPA) outhouse is exhibited as an attraction.

The following are the images of the Cave Creek Museum and some of Cave Creek's historic structures and artifacts.

All content from Kiddle encyclopedia articles (including the article images and facts) can be freely used under Attribution-ShareAlike license, unless stated otherwise. Cite this article:
List of historic properties in Cave Creek, Arizona Facts for Kids. Kiddle Encyclopedia.