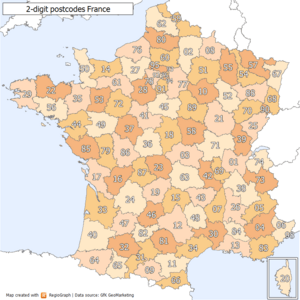 The French postal code format is F- (or FR-) 99999. The first two digits give the département number. In Paris, Lyon and Marseille, the last two digits of the postal code shows the arrondissement. These codes are also used by French overseas departments and territories, except for French Southern and Antarctic Territories and Clipperton Island. Monaco is also part of the French postal code system. The country code MC- is used for Monegasque addresses.

All content from Kiddle encyclopedia articles (including the article images and facts) can be freely used under Attribution-ShareAlike license, unless stated otherwise. Cite this article:
Postal codes in France Facts for Kids. Kiddle Encyclopedia.