List of reptiles of Yellowstone National Park facts for kids

This is a list of reptiles of Yellowstone National Park in the United States. 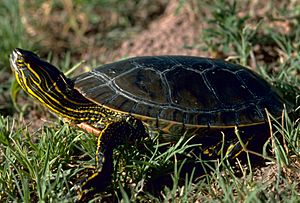 Painted turtles can be found in rivers and lakes along the northern edge of the park.

In Yellowstone, it is the park's largest reptile ranging from 50 to 72 inches long. It is found at lower elevations, drier, warmer climates, and open areas such as near Mammoth Hot Springs. The bullsnake lives in burrows and eats small rodents. It is often mistaken for a rattlesnake because of its appearance and its defensive behavior; when disturbed it will coil up, hiss loudly, and vibrate its tail against the ground, producing a rattling sound.

In Yellowstone, this is the only dangerously venomous snake in the park. It lives in the lower Yellowstone River areas of the park, including Reese Creek, Stephens Creek, and Rattlesnake Butte, where the habitat is drier and warmer than elsewhere in the park. Its behavior is usually defensive rather than aggressive. There have been only two rattlesnake bites reported during the history of the park.

The rubber boa (Charina bottae) is a snake in the family Boidae and genus Charina. The Boidae consists of the nonvenomous snakes commonly called boas and consists of 43 species. The genus Charina consists of four species, three of which are found in North America, and one species found in Africa.

In Yellowstone this snake is infrequently encountered in due to its nocturnal and burrowing habits. It eats rodents and may spend a great deal of time partially buried under leaves and soil, and in rodent burrows. It is usually found in rocky areas near streams or rivers, with shrubs or trees nearby. The most recent occurrences in the park have been in the Bechler region and Gibbon Meadows.

In Yellowstone, this is the only lizard found in the park. It is usually found below 6,000 feet elevation, but in Yellowstone it can live up to 8,300 feet. Populations living in thermally influenced areas are possibly isolated from others. It is most common along the lower portions of the Yellowstone River near Gardiner, Montana and upstream to the mouth of Bear Creek. It also occurs in Norris Geyser Basin, Shoshone and Heart Lake geyser basins, and other hydrothermal areas.

The valley garter snake (Thamnophis sirtalis fitchi) is a subspecies of the common garter snake. It is a snake indigenous to North America. Most garter snakes have a pattern of yellow stripes on a brown background and their average length is about 1 metre (3.3 ft) to 1.5 metres (4.9 ft). The common garter snake is a diurnal snake. In summer, it is most active in the morning and late afternoon; in cooler seasons or climates, it restricts its activity to the warm afternoons.

The wandering garter snake (Thamnophis elegans vagrans) is a subspecies of the western terrestrial garter snake, a species of colubrid snake residing only in Southwestern Canada, and Western United States. Seven subspecies are currently recognized. Most snakes have a yellow, light orange, or white dorsal stripe, accompanied by two stripes on its side of the same color. Some varieties have red or black spots between the dorsal stripe and the side stripes. This snake often inhabits coniferous forests, and is relatively aquatic.

In Yellowstone, this is the most common reptile in the park. It is usually found near water in all areas of the park. It eats small rodents, fish, frogs, tadpoles, salamanders, earthworms, slugs, snails, and leeches.

All content from Kiddle encyclopedia articles (including the article images and facts) can be freely used under Attribution-ShareAlike license, unless stated otherwise. Cite this article:
List of reptiles of Yellowstone National Park Facts for Kids. Kiddle Encyclopedia.