The subspecific name, sayi, is in honor of American naturalist Thomas Say.
Bullsnakes are an endemic species of Mexico, where they are called cincuate, (/sentli/; Náhuatl: corn, /coatl/; Náhuatl: snake).

Bullsnakes can be found throughout North America including all of the United States central and northern Mexico, and southern Canada in Saskatchewan, Alberta, and desert regions of British Columbia. 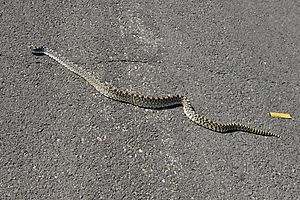 Adult bullsnakes average about 4 to 6 ft (1.2 to 1.8 m) in length, and specimens of up to 8 ft 4 in (2.5 m) have been recorded. Possibly being the largest subspecies of gopher snake on average, mature specimens can have an average weight in the range of 1–1.5 kg (2.2–3.3 lb), though the heavier known specimens can attain 3.6–4.5 kg (7.9–9.9 lb), with larger specimens being quite bulky for a colubrid snake. This makes bullsnakes among the largest snakes native to Canada and the United States, although they are generally not as long as indigo snakes nor as heavy or as large in diameter as rattlesnakes. They are usually yellow, with brown, white, black, or sometimes reddish blotching. The blotching pattern is large blotches on top, three sets of spots on the sides, and bands of black on the tail. Many color variations have been found, including albinos and white varieties. A scale count is required to distinguish juvenile bullsnakes from other juvenile gopher snakes.

Bullsnakes are very powerful constrictors that eat small mammals, such as mice, moles, rats, pocket gophers, ground squirrels, and rabbits, as well as ground-nesting birds, birds' eggs and lizards. Their climbing proficiency enables them to raid bird nests (and birdhouses) to eat the nestlings or sitting mother. One snake can eat five small birds within 15 minutes. Juvenile bullsnakes depend on small lizards, frogs, and baby mice.

The idea that bullsnakes occasionally eat rattlesnakes is sometimes given as a reason for humans not to harm bullsnakes when encountering them in the wild. 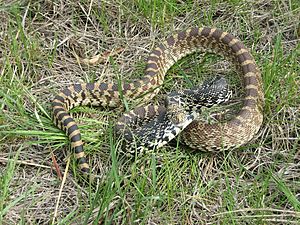 Though some bullsnakes can be docile, and with some time become accustomed to handling, most are quite defensive.

When bullsnakes detect live objects too big to be prey, they seem to perceive the object as a predator and take defensive action. Their first action is to remain quiet, not moving. Then, when they feel they are able to move away from the object, their next line of defense is to move away as quickly as possible. Bullsnakes, however, are not fast movers and often must take other defensive actions. When threatened by anything as large as a human, a bullsnake's next defensive action is to rear up and make itself look as large as possible, while at the same time hissing at the perceived threat. It typically then begins lunging and retreating at the same time to escape.

Bullsnakes can sometimes be mistaken for rattlesnakes and killed. Owing to its coloration, dorsal pattern, and semikeeled scalation, it superficially resembles the western diamondback rattler (Crotalus atrox), which is also common within the same range. The bullsnake capitalizes on this similarity by performing an impressive rattlesnake impression when threatened. First, it hisses, or forcibly exhales through a glottis or extension of the windpipe. The end of the glottis is covered by a piece of cartilage known as the epiglottis, which flaps back and forth when air is exhaled from the right lung, producing a convincing rattling sound. It also adopts a rattlesnake-like "S-curve" body posture as though about to strike. It commonly vibrates its tail rapidly in brush or leaves, and flattens its head to resemble the characteristic triangular shape of the rattlesnake. These defensive behaviors are meant to scare away threats, however, and not to sound an attack.

In contrast to rattlesnakes, which usually keep their tails elevated to sound the most efficient rattle, bullsnakes tend to keep their tails in contact with the ground, where they can be vibrated against leaves, for example.

Bullsnakes breed in March or April (depending upon their location) and usually lay their eggs in April, May, or June (again, depending upon when the snakes breed.) They typically lay 12 eggs in sand or other protected areas and leave the eggs to incubate unprotected. Clutches of five to 22 eggs have been observed. The eggs are elliptical, leathery, rough, sticky, and up to 70 mm (2 3⁄4 in) long. The eggs typically hatch in August or September. Baby bullsnakes are 20–46 cm (7.9–18.1 in) at hatching. Their color is grayish until after their first shed.

All content from Kiddle encyclopedia articles (including the article images and facts) can be freely used under Attribution-ShareAlike license, unless stated otherwise. Cite this article:
Bullsnake Facts for Kids. Kiddle Encyclopedia.