Little Dot is a comic book character published by Harvey Comics about a little girl who is obsessed with dots, spots, and round, colorful objects. She was created in 1949 by writer Alfred Harvey and artist Vic Herman. 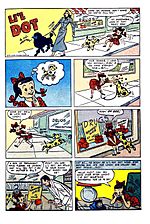 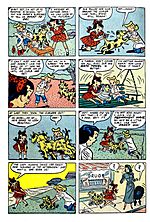 Little Dot (real name Dorothy Polka) was a "one-note character" with a reliance on formulaic gags and repetitious images (i.e. Dot's dots). Her stories also involved a considerable amount of slapstick humor and domestic comedy. The character's signature theme only became apparent in 1953, after she was redesigned to conform to the company's emerging house style. Consequently, as Dot became a virtual clone of Famous Studios' Little Audrey (which Harvey was licensing at the time), the 'Dotty' aspect was emphasized so that the two characters wouldn't appear too similar.

Dot's obsessive nature presaged the development of Harvey's quirky child-friendly characters, many of which deviated from the Audrey model by incorporating fantasy elements (Hot Stuff, Spooky), or oddball behavior (Little Lotta). On the other hand, generation-based humor always played an important role in Little Dot's storylines. Like her in-house contemporaries, Dot frequently found herself at odds with parents, teachers and other representatives of Bonnie Dell's adult population. Frequent plotlines involved her parents or teachers, who are annoyed with her obsession with dots, trying to trick her into giving up her dot addiction and catching it themselves. Another recurring story source is her numerous aunts and uncles who have myriad eccentricities that Dot has to deal with. In addition, Dot made regular crossovers with Little Lotta from the beginning of the sixties, usually with disastrous consequences (although Dot's fixation and Lotta's insatiable appetite often played only a peripheral role in such pairings). She and Lotta are classmates with Richie Rich.

All content from Kiddle encyclopedia articles (including the article images and facts) can be freely used under Attribution-ShareAlike license, unless stated otherwise. Cite this article:
Little Dot Facts for Kids. Kiddle Encyclopedia.