Little Audrey (full name: Audrey Smith) is a fictional character, appearing in early 20th century folklore prior to starring in a series of Paramount Pictures' Famous Studios cartoons from 1947 to 1958. She is considered a variation of the better-known Little Lulu, devised after Paramount decided not to renew the license on the comic strip character created by Marjorie Henderson Buell (a.k.a. "Marge"). Despite some superficial similarities between the two characters, the Famous animators were at pains to design Audrey in contrast to Lulu, adopting an entirely different color scheme and employing the stylistic conventions common to Famous Studios' later 1940s repertoire, as opposed to Buell's individualistic rendering of Little Lulu. Veteran animator Bill Tytla was the designer of Little Audrey, reportedly inspired by his daughter Tammy (who was also his inspiration for Famous' version of Little Lulu, on which he also worked and for which he directed several shorts). The original voice of Little Lulu was performed by actress Cecil Roy (who also provided the voice of Casper the Friendly Ghost). Little Audrey was, instead, voiced by Mae Questel, who also voiced most of Paramount's other major female cartoon characters, including Betty Boop and Olive Oyl.

Little Audrey has reddish brown hair with ribbons making three pigtails (two low and one high). She wears a little dress with puffed sleeves, white ankle socks, and black Mary Jane shoes. In the short subjects, the dress and ribbons are blue, but by the time of her Harvey Comics runs, they are red. In Harvey Street Kids, she wears a pink shirt with jeans.

The comic "Little Audrey & Melvin and Cousin Suzie's Dance Party" (issue unknown) reveals that Audrey has a cousin named Suzie, who has a friend named Bubu. The first several issues of the comic book also reveals she has a brother nicknamed "Patches".

While the jokes remained popular well into the 1980s, the Famous/Harvey character had an entirely different career:

Little Audrey was going to have a cameo in Who Framed Roger Rabbit, but rights to the character could not be obtained in time.

Animation historian Jerry Beck notes that Famous Studios' animator Steve Muffatti drew a short-lived "Little Audrey" comic strip for magazines in 1951, which were syndicated by King Features. These strips were also reprinted in 1952-55 by Harvey Comics. 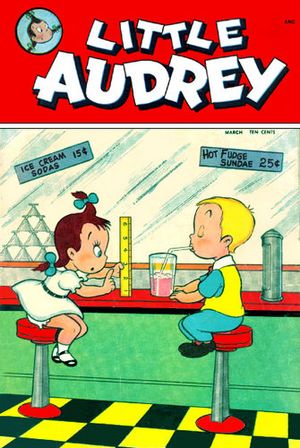 Little Audrey and Patches, as depicted in the St. John Publications series (1948-1952).

Little Audrey was never as successful as Famous' best-known creation, Casper the Friendly Ghost, but the character had considerable success in printed form. The first Little Audrey comic book series was St. John Publications from April 1948 to May 1952. Featuring stories which depended more on situation comedy than on fantasy, the comics featured artwork done in a style approximating the original Famous character designs (most of them by Steve Muffati). The series met with moderate success on the newsstand, running for approximately 24 issues until Little Audrey was licensed by Harvey Comics in 1952.

Initially, Harvey's comic-book version closely followed its animated template, but the character was redesigned during the mid-1950s to conform more closely to the company's in-house style. The general storyline was simultaneously overhauled to provide Audrey with supporting characters such as Melvin Wisenheimer, her prankish hero/boyfriend, and Tiny, a young African American boy. Domestic comedy gradually took over the scripts, as Audrey was shown in conflict with parents, teachers, and other authority figures.

Harvey purchased the rights to all of Famous' original properties - Little Audrey included - in 1958, also acquiring the rights to the post-1950 Audrey cartoons. It was during this time that the "definitive" Audrey came into being, taking on the signature red dress and appearance most often associated with the character. By 1960, Little Audrey was the best known of Harvey's female characters due to her multi-media presence (comic books, television/theatrical animation and - briefly - newspaper strips), although her popularity was later eclipsed by the company's other female characters, Little Dot, Wendy the Good Little Witch and Little Lotta.

Later comic series were titled Playful Little Audrey (the name under which the character had been trademarked in 1961) and Little Audrey & Melvin. In the latter, Audrey and Melvin become less antagonistic and Audrey demonstrates affections for and jealousy towards him, much like Little Lulu had done with Tubby Tompkins.

During her most successful period, Audrey starred in at least four of her own titles and was a back-up feature in Richie Rich, Casper, and Little Dot. The character lasted until 1976, when an industry-wide distribution slump brought an end to most of Harvey's line and most children's comics in general. Since that time, the character has undergone several revivals and made scattered television and video appearances, most notably in The Richie Rich Show (1996) and Baby Huey's Great Easter Adventure (1998).

All cartoons listed are entries in the series unless otherwise noted. Credited directors for each short are noted.

Note 1: These cartoons were rebroadcast as part of The Harveytoons Show (a.k.a. Casper and Friends), which aired in Canada on the now-defunct network Teletoon Retro.
Note 2: The first two cartoons (Santa's Surprise and Olive Oyl for President) are, respectively, part of the Noveltoons series for the first, and the Popeye the Sailor series instead for the second.
Note 3: The cartoon Song of the Birds is a remake of the homonym Max Fleischer Color Classic cartoon The Song of the Birds, which was released on March 1, 1935.

All content from Kiddle encyclopedia articles (including the article images and facts) can be freely used under Attribution-ShareAlike license, unless stated otherwise. Cite this article:
Little Audrey Facts for Kids. Kiddle Encyclopedia.