Little Lulu is a comic strip created in 1935 by Marjorie Henderson Buell. The character, Lulu Moppet, debuted in The Saturday Evening Post on February 23, 1935, in a single panel, appearing as a flower girl at a wedding and mischievously strewing the aisle with banana peels. Little Lulu replaced Carl Anderson's Henry, which had been picked up for distribution by King Features Syndicate. The Little Lulu panel continued to run weekly in The Saturday Evening Post until December 30, 1944.

Lulu was born in 1935, when The Saturday Evening Post asked Buell to create a successor to the magazine’s Henry, Carl Anderson’s stout, mute little boy, who was moving on to national syndication. The result was Little Lulu, the resourceful, equally silent (at first) little girl whose loopy curls were reminiscent of the artist’s own as a girl. Buell explained to a reporter, "I wanted a girl because a girl could get away with more fresh stunts that in a small boy would seem boorish". 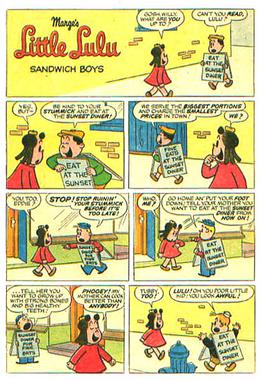 With the Dell Comics/Western Publishing split that created Gold Key Comics, Little Lulu went to Gold Key with issue No. 165. Tubby got his own comic series from 1952 to 1961, first appearing in Four Color No. 381, 430, 444, and #461; then his own title Marge's Tubby from No. 5 thru 49. In this series, Tubby had his own adventures without Lulu, especially with the Little Men from Mars.

Upon retirement, Marge sold Little Lulu to Western Publishing. The comic was re–named Little Lulu with No. 207 (September 1972). Publication of the comics ceased in 1984 (with issue No. 268, the last few under the Whitman Comics name), when Western discontinued publishing comics. Artist Hy Eisman retained stories intended for #269–270 (scripted by Paul Kuhn) because the artwork was returned to him after the comic was cancelled. Three of these are to be reprinted in the Lulu fanzine The HoLLywood Eclectern (HE). "The Case of the Disappearing Tutu", slated to be the lead story in Little Lulu No. 270, appears in HE No. 47 (2008).

There were also two giant-sized Annuals (#1–2, 1953–1954), 14 Dell Giants (with seasonal and other themes), a regular-sized unnumbered special on visiting Japan and three Gold Key Specials (two with Lulu on Halloween and summer camp and one with Tubby and the Little Men from Mars). Lulu also appeared in 20 issues of March of Comics and was reprinted in several Golden Comics Digests.

Between 1985 and 1992 Another Rainbow Publishing published a hardbound 18-volume set, the Little Lulu Library, collecting the stories in the Four Color issues, plus the regular series through No. 87.

Writer/artist John Stanley's work on the Little Lulu comic book is highly regarded. He did the initial Lulu comics, later working with artists Irving Tripp and Charles Hedinger (Tripp inking Hedinger before eventually assuming both duties), writing and laying out the stories. He continued working on the comic until around 1959. Stanley is responsible for the many additional characters in the stories. After Stanley, other writers produced the Lulu stories for Gold Key Comics, including Arnold Drake.

Little Lulu was featured on numerous licensed products, and she was the centerpiece of an extensive advertising campaign for Kleenex tissues during the 1940s–50s, and she was also seen in Pepsi-Cola magazine ads during that period. Kleenex commercials featuring Little Lulu were regularly seen in the 1950s on Perry Como's television show. Buell played an active role in merchandising Little Lulu, often taking a hands-on role in terms and negotiations. Today the trademarks on Little Lulu are held by Universal Studios (which manages the properties of DreamWorks Classics, as well as its parent company, DreamWorks Animation). 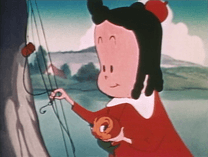 Screenshot from the 1947 short "A Bout with a Trout"

In the 1940s, Lulu appeared in a series of theatrical animated shorts produced by Famous Studios for Paramount Pictures from 1943 to 1948, which replaced the Superman shorts of the 1940s. In all, 26 Little Lulu cartoons were released in a period of less than five years. A similar character, Little Audrey, was then created after Paramount failed to renew the Lulu license (and therefore avoided the payment of royalty fees). The voice of Little Lulu was performed by Cecil Roy, and Tubby was performed by Arnold Stang.

The theme song for the shorts was written and composed by Buddy Kaye, Fred Wise, and Sidney Lippman but performed by the singing group Helen Carroll and the Satisfiers. Finally, Winston Sharples and Sammy Timberg did the musical arrangements.

In the early 1960s, Paramount and Famous Studios produced two new Little Lulu cartoons, "Alvin's Solo Flight" (a Noveltoon), and "Frog's Legs" (a Comic Kings cartoon, which is also the first), both based on two of John Stanley's comic stories. Cecil Roy reprised her role as Lulu, but Arnold Stang did not return as Tubby, because he was working, then, to voice the Top Cat character in the famous Hanna-Barbera cartoon.

Some of the shorts listed below were released into the public domain, and are marked with an asterisk (*) in the original release date column.

Little Lulu has starred in several TV series and specials.

ABC aired two half-hour live-action specials based on the character on Saturday morning as part of ABC Weekend Special series in the late 1970s. In both Little Lulu and The Big Hex of Little Lulu, Lulu was played by Lauri Hendler. The cast also included: Kevin King Cooper as Tubby, Lulu Baxter as Annie, Robbie Rist as Iggy and Annrae Walterhouse as Gloria.

In 1976–1977, Lulu appeared in Little Lulu and Her Little Friends (produced by Japan's Nippon Animation) on ABC, voiced by Eiko Masuyama in the first three episodes and Minori Matsushima for the remainder. An English-dubbed version of the anime was made for the American market by ZIV International in 1978.

In 1995, Lulu appeared in The Little Lulu Show on HBO, voiced first by Tracey Ullman and then by Jane Woods. The series was produced by Canada's CINAR after Marge's death in 1993. The series ended in 1999 but continued to air on Family Channel in Canada. It is currently seen on Teletoon Retro in Canada.

As a cameo appearance, Little Lulu was planned for the 1988 film Who Framed Roger Rabbit, but rights to the character could not be obtained in time. She was relegated to appear in the planned sequel, which has been indefinitely delayed. She eventually makes a cameo appearing on a comic cover in The Simpsons episode "Husbands and Knives" (2007), being read by Alan Moore.

Lulu fans hold an annual gathering at the San Diego Comic Con in which they perform a play adapted from a classic Lulu story.

As of 2009, a new revival of Little Lulu happened with the launch of Luluzinha Teen e sua Turma (in English: Little Lulu Teen and her Gang), a Brazilian comic book series depicting Lulu and her friends as teenagers, with a manga style art. The book was created in an attempt to rival Monica Teen, another comic book which also adapts a popular franchise (in this case, Brazilian Monica's Gang) to manga style and presents its characters as teenagers.

Luluzinha Teen e sua Turma became very popular in its debut, being one of the best-selling comics in Brazil for a while, second only to its "rival". Nevertheless, unlike Monica Teen (which is still being published), Little Lulu's teen spin-off was canceled in 2015 due to low sales, reaching 65 editions released.

Little Lulu in other languages

Published by Another Rainbow Publishing, were a series of six-book box sets released from 1985 to 1992. They were published in reverse order, with Set VI being released first, then counting down to Set I. Each of the six sets contains three volumes, each with about six comics. The comics are printed in black and white; however, the covers are printed in full color. The books are about 9" by 12", with the pages being larger than the original comic book pages.

In 2004, Dark Horse Comics obtained the rights to reprint Little Lulu comics. Eighteen black and white volumes, plus an unnumbered color special, were published through early 2008. After a short hiatus, the series resumed in mid-2009 in full color. Volumes 4 and 5 were originally published before the first three volumes, as it was felt that their content was more accessible. 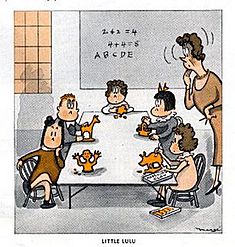 All content from Kiddle encyclopedia articles (including the article images and facts) can be freely used under Attribution-ShareAlike license, unless stated otherwise. Cite this article:
Little Lulu Facts for Kids. Kiddle Encyclopedia.