The little wattlebird (Anthochaera chrysoptera), also known as the brush wattlebird, is a passerine bird in the honeyeater family Meliphagidae. It is found in coastal and sub-coastal south-eastern Australia.

The little wattlebird was formally described by ornithologist John Latham in 1801 under the binomial name Merops chrysoptera. The species is now placed in the genus Anthochaera that was introduced by Nicholas Aylward Vigors and Thomas Horsfield in 1827. The generic name Anthochaera deives from the Ancient Greek anthos 'flower, bloom' and khairō 'enjoy'; the specific epithet chrysoptera derives from Ancient Greek khrysos 'gold' and pteron 'wing'.

The western wattlebird (A. lunulata) was at one time considered as a subspecies. 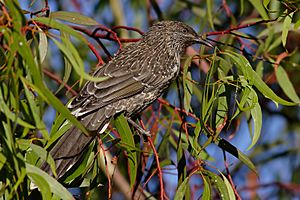 Calls include a strident cookay-cok, a raucous fetch the gun, a mellow guttural yekkop, yekkop and many squeaky, musical lilting notes. The alarm call is a kwock or shnairt!. 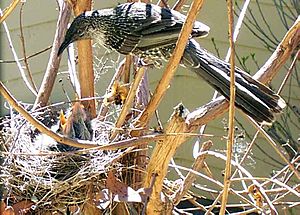 Breeding takes place from June to December. The female wattlebird generally constructs the nest, which is a loose, untidy cup of twigs, lined with shredded bark, and placed from 1 to 10 m high in the fork of a banksia, tea-tree or eucalypt sapling. 1-2 eggs are laid and may be spotted red-brown, purplish-red or salmon-pink in colour. The female incubates the eggs alone but both parents care for the young chicks.

Little wattlebirds feed on nectar obtained with a long, brush-tipped tongue, adapted for probing deep into flowers. They also feed on insects, berries, and some seeds. Most feeding is done perched, but some insects are caught in mid-air. Birds may feed alone or in groups.

All content from Kiddle encyclopedia articles (including the article images and facts) can be freely used under Attribution-ShareAlike license, unless stated otherwise. Cite this article:
Little wattlebird Facts for Kids. Kiddle Encyclopedia.