Kids Encyclopedia Facts
In this Chinese name, the family name is Liu (柳).

Liu Zongyuan (773 – 28 November 819) was a Chinese writer, politician, and poet who lived during the Tang Dynasty. Liu was born in present-day Yongji, Shanxi. Along with Han Yu, he was a founder of the Classical Prose Movement. He has been traditionally classed as one of the "Eight Great Prose Masters of the Tang and Song".

Liu Zongyuan was born in 773. His courtesy name was Zihou.

Liu Zongyuan's civil service career was initially successful; but, in 805, he fell out of favour with the imperial government because of his association with a failed reformist movement. He was exiled first to Yongzhou, Hunan, and then to Liuzhou, Guangxi, where he eventually became the city Governor. A park and temple in Liuzhou is dedicated to his memory. His exile allowed his literary career to flourish: he produced poems, fables, reflective travelogues and essays synthesizing elements of Confucianism, Taoism and Buddhism. 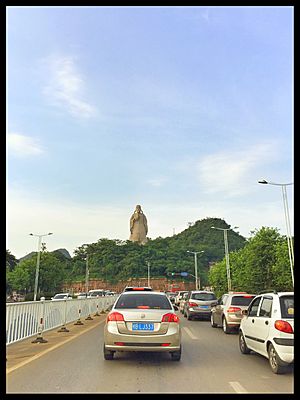 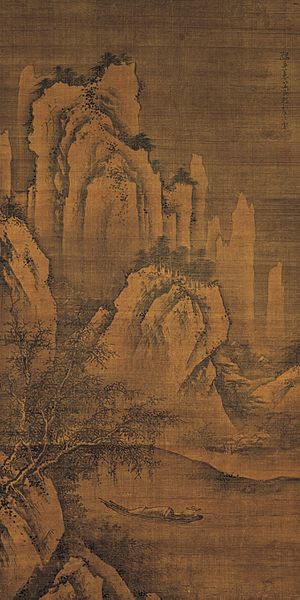 Liu's best-known travel pieces are the Eight Records of Excursions in Yongzhou (永州八游记). Around 180 of his poems are extant, of which five have been collected in the anthology Three Hundred Tang Poems. Some of his works celebrate his freedom from office, while others mourn his banishment.

One of his most famous poems is "Jiangxue" (江雪), sometimes translated into English as "Winter Snow" or "River Snow": this poem has been an inspiration to many works of Chinese painting.

All content from Kiddle encyclopedia articles (including the article images and facts) can be freely used under Attribution-ShareAlike license, unless stated otherwise. Cite this article:
Liu Zongyuan Facts for Kids. Kiddle Encyclopedia.