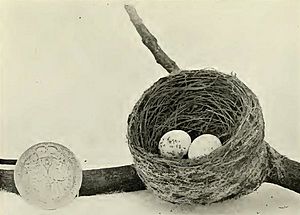 The Lord Howe fantail has sometimes been treated as a full species. It differed from the other subspecies by its entire underparts being light cinnamon-brown, with a paler throat, lacking the white throat with the dark bar delimiting it from the breast.

The Lord Howe fantail was restricted to Lord Howe Island, where it inhabited the native subtropical rainforest.

The birds were very tame, commonly seen around buildings which they often entered in search of insects.

The fantail built a cup-shaped nest, with a rudimentary tail, of decayed wood fibre and grass, bound with cobwebs and lined with fine grass, situated on a horizontal branch. The clutch was usually three, sometimes two, eggs.

The Lord Howe fantail was reported as common in 1909 but disappeared not long after black rats were accidentally introduced to the island with the grounding of the ship SS Makambo there in June 1918. It was reported in 1924 that the birds were "practically wiped out" and there are no records from subsequent years. The fantail was only one of a suite of Lord Howe's endemic birds and other fauna exterminated by rat predation.

All content from Kiddle encyclopedia articles (including the article images and facts) can be freely used under Attribution-ShareAlike license, unless stated otherwise. Cite this article:
Lord Howe fantail Facts for Kids. Kiddle Encyclopedia.