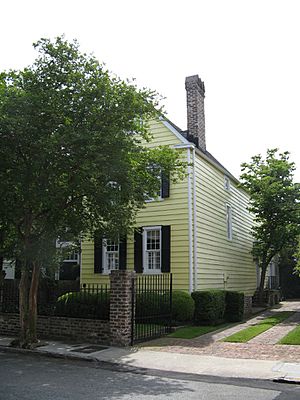 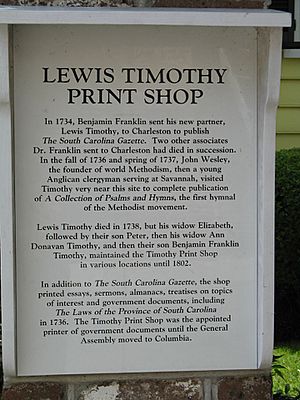 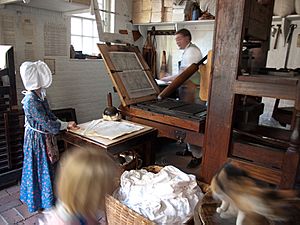 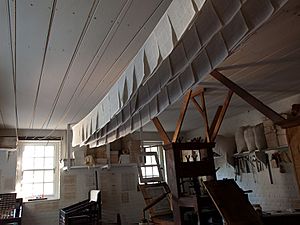 Louis Timothee or Lewis Timothy was a prominent Colonial American printer in the Colonies of Pennsylvania and South Carolina, who worked for Benjamin Franklin. He was the first American librarian.

Timothy was born in Holland to French Huguenot parents who lived in Rotterdam after they fled France to escape religious persecution. As a young man in the Netherlands he learned printing from his father.

Timothy, with his wife, Elizabeth, and four sons, moved to British America in 1731. He took the Oath of Allegiance to King George II at Philadelphia upon arrival on 21 September 1731, as was required of all male immigrants to British America.

Timothy was fluent in German, French, and English as well as his native tongue, Dutch. The month after arriving in Philadelphia, Timothy advertised in the Pennsylvania Gazette his intention to open a "Publick French School; he will also, if required, teach the said language to any young gentlemen or ladies, at their Lodgings."

Timothy advertised for work in Benjamin Franklin's Pennsylvania Gazette initially and got a job as a French teacher. He got acquainted with Franklin in Philadelphia because of his printing skills and started working for him, learning to publish a newspaper. His first attempt at a newspaper was the German-language Philadelphische Zeitung. It came out in the spring of 1732 and failed within a year. After that Timothy was the printer for the Pennsylvania Gazette, owned by Franklin. Franklin was impressed by Timothy's work, so on 26 November 1733 Franklin entered into a six-year contract with him; Franklin would furnish printing equipment for publishing the floundering South Carolina Gazette weekly newspaper in Charleston, South Carolina. Timothy was to publish the newspaper and pay back over six years the expenses Franklin furnished up front. The previous editor, Thomas Whitmarsh, died of yellow fever in 1733; his predecessor died in 1731. Timothy did well as the newspaper publisher and became the official "public printer" and postmaster for the colony of South Carolina. Timothy expanded his printing business to an assortment of jobs, including books and pamphlets. In this period Lewis Timothy's son Peter Timothy was beginning apprenticeship in his father's print shop. The Franklin-Timothy agreement was that Franklin was to provide the printing typefonts and the press. Franklin also agreed to pay one-third of the maintenance costs; in return he was to receive one-third of the profits. The agreement also provided that Peter would have the printing business in the event of his father's untimely death.

Timothy's printing career started just following the departure for Carolina of Thomas Whitmarsh, a journeyman in Benjamin Franklin's printing business, whom Franklin funded as a silent partner when Whitmarsh began the South-Carolina Gazette in Charleston. Franklin had an opening for a journeyman in his Philadelphia shop in 1733. Timothy had linguistic abilities and was knowledgeable in the printing trade. Franklin decided to hire Timothy based on these talents since he needed a new printer partner right away. To avoid tipping off his competitors with whom Franklin exchanged other newspapers of Charles Towne printers, Franklin never announced Whitmarsh's death in the Pennsylvania Gazette, but just went ahead and hired Timothy as his replacement.

Franklin hired Timothy by November 1733 on almost the same terms that Whitmarsh had with him as a partner. Timothy probably was already working in Franklin's shop by February 1732. Since Timothy was fluent in German, soon after he was working at Franklin's shop in 1732 Timothy translated into English for publication a lengthy German letter. He had done such a good job at this Franklin shortly afterward assigned Timothy responsibility for a short-lived German-language newspaper.

In 1732 also Franklin arranged for Timothy to serve as a part-time librarian for the Library Company of Philadelphia, one of Franklin's first philanthropic projects. Franklin started the library July 1, 1731. There was no librarian until November 14, 1732, when Timothy was hired as the first salaried librarian in the American colonies. He was paid three pounds sterling every trimester. He worked every Wednesday from two to three o'clock and every Saturday from ten to four.

Timothy arranged with Benjamin Franklin to revive the South Carolina Gazette weekly newspaper. He went to Charleston by himself in the later part of 1733. He started publishing the newspaper on 2 February 1734. Timothy followed later from Philadelphia and went to Charleston in the spring of 1734. She came to Charleston with her six children, four of which were children born in the Netherlands. This was the year Timothy anglicized his name to "Lewis Timothy", being three years after arriving to America.

In Franklin's Philadelphia shop Timothy continued Whitmarsh's practice of reprinting essays encouraging people to be optimistic and virtuous. One day in 1738 Timothy informed his readers that his publication of a pamphlet was delayed "by reason of Sicknes, myself and Son having been visited with this Fever, that reigns at present, so that neither of us hath been capable for some time of working much at the Press." Timothy died two months after this announcement. He may have contracted the deadly yellow fever, but there are no records to show this for sure. In fact on January 4, 1739, the South-Carolina Gazette noted that the cause of his death was "an unhappy accident."

Timothy had anticipated the likelihood of his own demise because three previous South Carolina printers had died soon after arriving in the colony. He had put in a special clause inserted in the Franklin partnership contract that his eldest son Peter could succeed him if he prematurely died. Peter was just thirteen years old when Timothy died. He was then training as an apprentice with his father, however was too inexperienced yet to take over the business. Franklin agreed to take on Elizabeth Timothy, the wife of Timothy, as a partner until Peter was capable of running the shop. When Elizabeth became Franklin's printer partner she had six children. Peter took over a portion of the South-Carolina Gazette newspaper publication in 1740 and the complete printing business in 1746 that included the newspaper and printing of government works as the official "public printer" for the colony of South Carolina. When Peter was twenty-one years old he took over the partnership his father had with Franklin and worked closely with Franklin for over the next thirty years.

The South Carolina Gazette newspaper of 2 February 1734 is a work attributed to Timothy:

All content from Kiddle encyclopedia articles (including the article images and facts) can be freely used under Attribution-ShareAlike license, unless stated otherwise. Cite this article:
Louis Timothee Facts for Kids. Kiddle Encyclopedia.