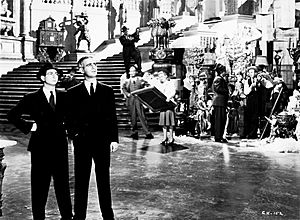 Louise Currie (center) beside Alan Ladd in a publicity photograph for Citizen Kane (1941), in which they both had uncredited roles as reporters 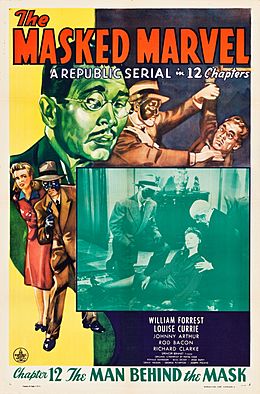 Currie was born in Oklahoma City, Oklahoma, the daughter of Charles W. Gunter, a banker, and his wife, Louise (née Currie), whose maiden name she would take for her professional acting surname. She was prominent in society. While attending the Martha Washington Seminary, a finishing school for young women in Washington, D.C., she was chosen one of the ten most beautiful society girls in the nation's capital. She attended Sarah Lawrence College in New York, where she became interested in acting. She moved to Hollywood, California and attended Max Reinhardt's drama school, where she was spotted by talent scouts while taking part in the school's stage workshop. She declined to attempt screen tests until after graduation.

With the help of her agent, Sue Carol, wife to actor Alan Ladd, she began working with Monogram Pictures and Columbia Pictures. Most of her movies were B-movies and serials, in which she often portrayed the heroine. Her film career began in 1940, when she appeared first in Billy the Kid Outlawed and then, as a society debutante, in the Kay Kyser musical You'll Find Out. In 1941 she starred in the serial Adventures of Captain Marvel opposite Tom Tyler.

Currie had an uncredited role in Citizen Kane (1941), as a reporter at Xanadu. She was the last surviving Kane cast member.

Currie's marriage to Robert A. Hefner II, "scion of a wealthy Oklahoma oil family," ended in divorce January 29, 1940. She married actor John Whitney (1918-1985) at the peak of her career, but the marriage ended in divorce. On May 4, 1948, she married character actor John Good. He retired from acting, and the two opened a successful antique import-export business in Beverly Hills, remaining together until his death in December 1996.

In 1944, Currie had starred opposite Hollywood legend Bela Lugosi in Voodoo Man. Along with actress Lucille Lund and others, she took part in the documentary film Lugosi: Hollywood's Dracula (1997), which detailed the life and acting career of Lugosi. In 2002, she married Grover Asmus, widower of actress Donna Reed.

On May 17, 2010, Currie appeared at the Academy of Motion Picture Arts and Sciences in Beverly Hills to introduce a screening of a restored print of the first chapter of the 1941 serial, Adventures of Captain Marvel. She made repeat appearances on May 24, 2010 and August 16, 2010.

All content from Kiddle encyclopedia articles (including the article images and facts) can be freely used under Attribution-ShareAlike license, unless stated otherwise. Cite this article:
Louise Currie Facts for Kids. Kiddle Encyclopedia.