Louisville Waterfront Park is an 85-acre (340,000 m2) municipal park adjacent to the downtown area of Louisville, Kentucky and the Ohio River. Specifically, it is adjacent to Louisville's wharf and Riverfront Plaza/Belvedere, which are situated to the west of the park.

Phase I of Waterfront Park consists of approximately 55 acres (220,000 m2) and was dedicated on July 4, 1999. Louisville architects Bravura Corporation, together with Hargreaves Associates, were the designers of the park. Much of the park, such as the Great Lawn, had opened to the public by the fall of 1998. The initial development cost was about $58 million, a combination of public and private money. The site of the park was previously used for industrial purposes: scrap yards, sand pits and other industrial sites.

The park hosted hundreds of events in its first full season of use, including outdoor concerts and other festivals, with an estimated total attendance of more than a million people. There were problems early-on with the grass being too easily worn down by visitors.

Phase II of the park opened on June 10, 2004, and added approximately 17 acres (69,000 m²), including the Adventure Playground, which opened in July 2003. Included is an esplanade along the river's edge and a cafe plaza where the Tumbleweed cafe opened in the spring of 2005. The park also contains the Brown-Forman amphitheater, docks for transient boaters, and an area for a new rowing facility. The latter is used for the University of Louisville Women's Rowing Team, school and community rowing groups.

Construction on part of Phase III began in late spring of 2005, to add 13 acres (53,000 m²) and include the conversion of the former Big Four Railroad bridge going between the park and Jeffersonville, Indiana's waterfront park into a pedestrian bridge. Several more lawn areas, tree groves, walking paths, and picnic areas will also be added. As of May 2007 it was not clear when the long-planned conversion will begin, as funding had not yet been found. 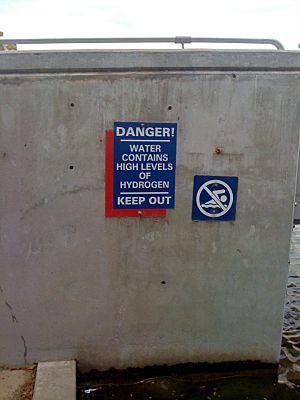 In 2006, David Karem, executive director of the Waterfront Development Corporation, a public agency that operates Waterfront Park, wished to deter visitors from bathing in the large public fountain. He initiated a plan that was dependent on the average park visitor's "lack of understanding about water's chemical makeup", and arranged for signs that read: "DANGER! – WATER CONTAINS HIGH LEVELS OF HYDROGEN – KEEP OUT". The signs were posted on the fountain at public expense. As it is true that ordinary water molecules each contain two atoms of hydrogen, and thus posed no danger, it is considered one of many water-related hoaxes.

In July 2012, Jeffersonville City officials unveiled plans for a plaza, dubbed the "Big Four Station", costing approximately $3 million that will surround the new ramp, to be completed in early 2013, from the Big Four pedestrian bridge. The plaza was to include a covered playground, fountain, stage, pavilion and plenty of green space. The new plaza was expected to be finished by early 2014.

The bridge was completed in May 2014 with the opening of the Jeffersonville ramp.

In 2013 the park won the Rudy Bruner Award for Urban Excellence a national design award that seeks to identify and honor places that address economic and social concerns in urban design. 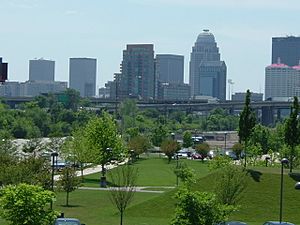 As of the summer of 2005, Waterfront Park offers free wireless Internet access. Currently, this is the largest public park in the nation to offer such access.

The park is packed each year during Thunder over Louisville, a major fireworks exhibition which occurs on the Ohio right in front of the park.

The western half of the park features linear fountains, not officially intended for swimming but nevertheless popular for that purpose. Further east are two expansive lawns, bisected by the interstate, and a small series of docks for boats. Nearby are the Children's Play Area and the Adventure Playground. If completed, the pedestrian walkway and ramp will be on the eastern end of the park.

The park is heavily used on a daily basis, and averages more than 1.5 million visitors per year. It is a popular home to free and pay concerts and festivals, especially in the summer.

Waterfront Park connects to the Riverwalk via the Belvedere, and may eventually be part of an effort to create a long mixed use trail around the entire city of Louisville.

I-64 runs through the park, and portions of the park exist under it. 8664, a grassroots campaign, has aimed to re-route I-64 to enhance Louisville's waterfront. I-64 will be widened over the park as a part of the Ohio River Bridges Project, supported by the Mayor and most involved in city and interstate planning.

In May 2007 designs for the span over the Great Lawn were released, causing some controversy. The two proposed designs called for either 40 or 58 pillars, at a cost of $48 or $36 million, respectively. The Waterfront Development Corporation favored a $160 million proposal which could have as few as 10 pillars, and an aesthetically pleasing span design. This more expensive proposal was left out of the options presented. The Kentucky Transportation Cabinet later apologized for omitting the design and said it could still be considered, but additional funding would have to be found. 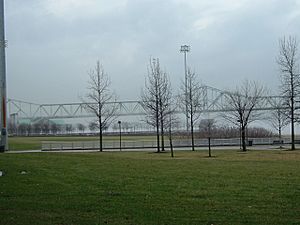 All content from Kiddle encyclopedia articles (including the article images and facts) can be freely used under Attribution-ShareAlike license, unless stated otherwise. Cite this article:
Louisville Waterfront Park Facts for Kids. Kiddle Encyclopedia.