The Lower Haight is a neighborhood, sometimes referred to as Haight–Fillmore, in San Francisco, California. 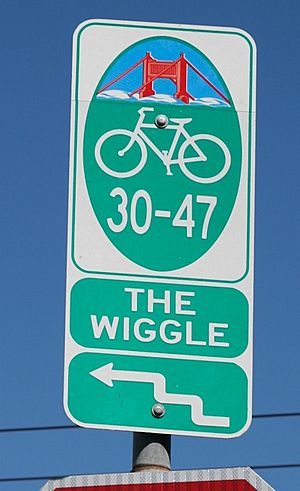 The Wiggle bicycle route through the Lower Haight

Referred to as "Pine Valley" in the 70s because of all the pine trees, the Lower Haight lies generally along Haight Street east of Divisadero Street, and between Oak Street (or Fell Street) on the north, and Duboce Avenue (or Waller Street) on south. The eastern boundary is variously placed at Webster Street, Laguna Street, or even Market Street. It is east of the more famous Haight-Ashbury, which is also known as the Upper Haight. The name derives from the significant elevation change as Haight Street climbs steeply from Scott Street to Buena Vista Park.

The area straddles a shallow valley between Mint Hill and Upper Haight, sloping down from Oak Street (north) toward Duboce (south). Duboce Park, toward the corner of Duboce and Scott, is a grassy park containing a children's playground, dog park, and the Harvey Milk Recreational Arts Building.

Adjacent neighborhoods include the Western Addition/Alamo Square to the north; Duboce Triangle to the south; Hayes Valley to the east; and the Upper Haight to the west. 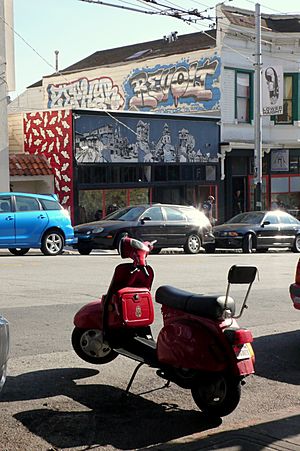 Lower Haight differs from Upper Haight by having a more diverse population and a smaller number of retail businesses. The Victorian and Edwardian houses tend to be less ornately painted and maintained in the Lower Haight than in the Haight/Ashbury neighborhood, and rent can be lower. The neighborhood has been referred to as having a "grungey, post-punk bohemian" atmosphere.

The San Francisco Zen Center is at the northeast edge of the neighborhood in an elegant brick building designed by famed architect Julia Morgan in 1922.

The area is served by several San Francisco Municipal Railway (MUNI) bus lines and it is a few blocks away from all of the MUNI Metro lines. The heart of the neighborhood, at the corner of Fillmore and Haight, is six blocks away from the subway stop of Church and Market, which is also the location of the city's largest supermarket, a Safeway. Surveys show that this neighborhood has one of the highest number of daily trips by bike per capita of any San Francisco neighborhood, and walking is also very popular.

The geography of the Lower Haight lends itself to the most efficient bicycle routing from the Mission District towards Golden Gate Park and surrounding neighborhoods, and the popular bicycle route termed The Wiggle zig zags through this neighborhood.

All content from Kiddle encyclopedia articles (including the article images and facts) can be freely used under Attribution-ShareAlike license, unless stated otherwise. Cite this article:
Lower Haight, San Francisco Facts for Kids. Kiddle Encyclopedia.