Lowesdale is a town community in Australia in the central south part of the Riverina and situated about 2 kilometres north of Buraja and 92 kilometres east of Berrigan on the Riverina Highway. At the 2006 census, Lowesdale had a population of 220.

In 1915, the small community of Lowesdale entered two football teams in the Coreen & District Football Association, Lowesdale FC and the Lowesdale Military FC who went onto win the 1915 premiership. Both teams went into recess in 1916 due to WW1 and both team's were never re-established. 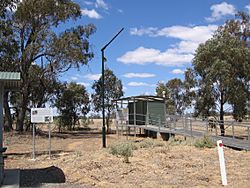 A rest area on the Riverina Highway, near Lowesdale

All content from Kiddle encyclopedia articles (including the article images and facts) can be freely used under Attribution-ShareAlike license, unless stated otherwise. Cite this article:
Lowesdale, New South Wales Facts for Kids. Kiddle Encyclopedia.