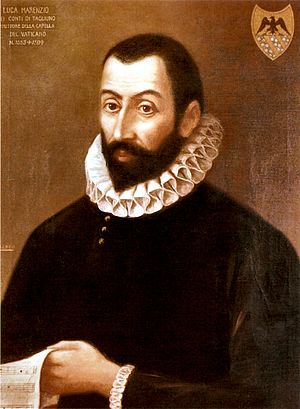 Luca Marenzio (born Coccaglio, near Brescia, Italy, 18 October? 1553?; died Rome, 22 August 1599) was an Italian composer who lived in the late Renaissance. He was one of the best known composers of madrigals.

Marenzio may have been born in 1553. We think this because his father once wrote down his son’s age. The date may have been 18 October because that was his saint’s feast day.

He had his early education in Brescia possibly in Mantua. Then he moved to Rome, where he worked as a singer for Cardinal Cristoforo Madruzzo. After the cardinal's death he worked at the court of Cardinal Luigi d'Este. Here he started to become known as a composer. By 1581 his music had become extremely popular. His books of madrigals were often reprinted. His madrigals were often included in published collections.

In 1587 he moved to Florence where he worked for Ferdinando I de' Medici for two years; in 1589 he returned to Rome, where he spent most of his last years, except for a trip to Poland from 1596 to 1597, during which time he worked at the court of Sigismund III Vasa in Warsaw. It seems from what some people wrote that his trip to Poland ruined his health, and he died in Rome in 1599, shortly after returning from Poland.

Marenzio wrote some religious music: motets, and madrigals based on religious texts. However, most of his famous music consists of secular (not religious) madrigals. They were written during a period of twenty years, and they vary a lot in style.

Marenzio published at least fifteen collections of music, mostly madrigals but also canzonette and villanelle. These were similar to madrigals but very light in character. Some of his later works are very chromatic: they use harmony that was unusual for the time. He often makes the music fit the meaning of the words. This is called word-painting. For example: the phrase "sinking in the sea" is sung to notes which go lower and lower.

Marenzio’s music had a lot of influence on composers in Italy, as well as in the rest of Europe. There were several of his madrigals in Musica transalpina, a collection of madrigals published in 1588 by Nicholas Yonge in England.

All content from Kiddle encyclopedia articles (including the article images and facts) can be freely used under Attribution-ShareAlike license, unless stated otherwise. Cite this article:
Luca Marenzio Facts for Kids. Kiddle Encyclopedia.