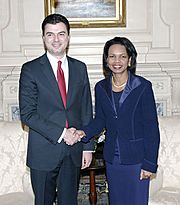 Lulzim Basha (; born 12 June 1974) is an Albanian conservative politician who was Mayor of Tirana, from 2011 to 2015. He has also been Chairman of the Democratic Party of Albania, the main opposition party, since 2013.

All content from Kiddle encyclopedia articles (including the article images and facts) can be freely used under Attribution-ShareAlike license, unless stated otherwise. Cite this article:
Lulzim Basha Facts for Kids. Kiddle Encyclopedia.