Luning is an unincorporated town in Mineral County, Nevada, in the United States. Luning is on U.S. Highway 95, between Hawthorne and Mina. Luning had an active railroad loading facility for many years. Magnesium ore from Gabbs was trucked to Luning and transferred to railroad cars bound for the West in World War II. The Basic Refractories mine in Gabbs was opened in 1955; it produced magnesium that was also trucked to the Luning loading platform, where most men in town worked.

A sign on the Long Branch Saloon says "Settled 1864." The saloon - still open in 1980 - has since closed. The town's one-room school is well maintained, but is also closed. It is often listed as a ghost town, but it is not. The population of Luning, Nevada, as of 2005 is 87. There is also an active page for the "ghost" town on Facebook, maintained by residents.

The town once had a small store with attached gas station, a saloon, volunteer fire department station, and a post office. Except for the post office at 202 Plymire Street, all have since closed. The ZIP Code of Luning is 89420. Luning has two recent improvements: cell phones and a highway rest stop.

A station on the Southern Pacific Railroad between Thorne and Mina as a supply center for the Nevada Brucite quarry. Named for Nicholas B Luning, a bondholder of the Carson and Colorado Railroad. The town originally called Deep Wells started in 1881 and changed its name to Luning when the railroad arrived. The post office opened January 16, 1882. 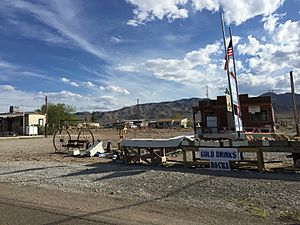 Fred was a dentist, an inventor, and a stone man. Born in West Virginia in 1867, he travelled with his parents and five siblings to California where the family operated a marble monument company.

In 1894 Dr. Fred is listed in Stone, an illustrated magazine, in Notes from Quarry and Shop: “Fred Plymire, recently of Vallejo, and L. McCoy from Red Bluff, will establish marble works in Redding, Cal.” Fred is listed in the Official Catalogue of Exhibitors; Panama-Pacific International Exposition, San Francisco, 1915, Department of Mines and Metallurgy, State of Nevada, Group 153; Plymire, Dr. F. A., Mina. Polished marble.

After 20 years in Luning, Dr. Fred returned to California where he retired. He died in 1929 at Napa State Hospital in "general paralysis of insane."

The Köppen Climate System classifies the weather in this area as semi-arid, abbreviated BSk. This climate type occurs primarily on the periphery of true deserts in low-latitude semiarid steppe regions.

All content from Kiddle encyclopedia articles (including the article images and facts) can be freely used under Attribution-ShareAlike license, unless stated otherwise. Cite this article:
Luning, Nevada Facts for Kids. Kiddle Encyclopedia.