The Lyman Estate, also known as The Vale, is a historic country house located in Waltham, Massachusetts, United States. It is now owned by the nonprofit Historic New England organization. The grounds are open to the public daily for free; an admission fee is required for the house.

The estate was established in 1793 by Boston merchant Theodore Lyman on 400 acres (160 ha) of grounds, and was the Lyman family's summer residence for over 150 years. It consisted originally of the mansion and its lawns, gardens, greenhouses, woodlands, a deer park, and a working farm. Today the grounds contain a number of specimen trees, a 600-foot (180 m) brick peach wall, and late 19th century rhododendrons and azaleas introduced by the Lyman family. 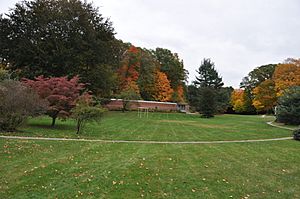 The back lawn and peach wall 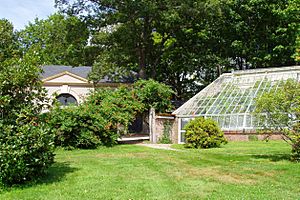 Carriage house and a greenhouse.

The fine Federal style mansion, of 24 rooms, was designed by Salem architect Samuel McIntire and completed in 1798. Its grand ballroom, with high ceiling, decorative frieze, large windows, and marble fireplace, was used for formal parties. A smaller oval room was used for family gatherings. McIntire's design was substantially altered during an expansion of the building in 1882 to designs by Richardson, Hartwell and Driver.

The estate's first greenhouse was constructed before 1800 and is thought to be the oldest in the United States. The Grape House, built in 1804 to raise exotic fruits such as oranges, pineapples, and bananas, today houses extensive grape vines, grown from cuttings taken in 1870 from Hampton Court in England. The Camellia House was built around 1820 for cultivation of camellias, introduced to America via Europe in 1797 from coastal China, Japan, and Korea. Many of the Lyman camellias are more than 100 years old. The greenhouses are open to the public.

In the 1960's, the Lyman family, after losing money to a declining textile industry, chose to sell portions of the estate. On October 4, 1962 the property was going to be sold to housing developers, but was instead sold to Bentley University for $365,000. It makes up most of the land that Bentley sits upon.

The estate was designated a National Historic Landmark in 1970 for its architecture and for its landscape design, which is remarkably rare for having retained much of its original 18th-century character.

All content from Kiddle encyclopedia articles (including the article images and facts) can be freely used under Attribution-ShareAlike license, unless stated otherwise. Cite this article:
Lyman Estate Facts for Kids. Kiddle Encyclopedia.