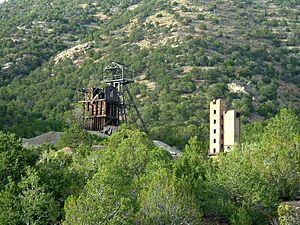 The old Kelly Mine headframe south of Magdalena (2005 photo) 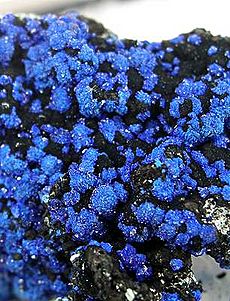 Azurite from the Kelly Mine

Magdalena is a village in Socorro County, New Mexico, United States. The population was 926 in 2012.

"The Lady on the Mountain" is a rock formation on Magdalena Peak overlooking Magdalena. Spanish soldiers saw the profile of a woman on the west face of the peak. A priest with them was reminded of a similar peak in Spain called "La Sierra de Maria Magdalena", so he called the New Mexico one "La Sierra de Magdalena". The pass to the south of the peak became known as Magdalena Gap, and when a town grew up it received the same name.

Magdalena continues to be a ranching community while strengthening its art, astronomy and geology venues. The reopening of the Magdalena Hall Hotel (circa 1917) and the renovation of other historical buildings allow visitors to connect to the past. The Magdalena Public Library and Boxcar Museum are housed in the old railroad depot. Several rock and mineral shops have been around since the mining boom days. The ghost town of Kelly and two festivals, the "Open Studio and Gallery Tour" and the "Old Timers Reunion and Rodeo", bring tourists to the area. The "Enchanted Skies Star Party" in early fall brings astronomers and astro-photographers together under its very dark skies.

The Very Large Array lies 24 miles due west of the community. The Magdalena Ridge Observatory lies 25 miles southeast at an elevation of 10,600 feet. Magdalena is located 26 miles west of Socorro, New Mexico.

According to the United States Census Bureau, the village has a total area of 6.2 square miles (16 km2), all of it land.

In 1884, the village of Magdalena was named after Magdalena Peak when its post office opened. Magdalena was incorporated as a town in 1913, during a mining boom.

Magdalena is known as the "Trails End" for the railroad spur line that was built in 1885 from Socorro to Magdalena to transport the cattle, sheep wool, timber and ore. Thousands of cattle and sheep were driven into town (cowboy style) from the west, using the historic "Magdalena Trail". This stockyard driveway was used annually, from 1885 through 1916 when the driveway was officially designated by law through the signing of the "Grazing Homestead Act". It was continually in use through 1971. The original stockyards are still intact.

In 1883, about 2.5 miles (4.0 km) south of Magdalena, the Kelly Mine opened in Kelly, New Mexico. The Kelly Mine produced lead, silver, zinc and smithsonite until the markets collapsed. Kelly's population reached nearly 3,000 during the mining boom. The last residents of Kelly departed in 1947 and it is now a ghost town. The Kelly Church still stands and is the site of periodic festivities.

There were 372 households, of which 30.1% had children under the age of 18 living with them, 46.2% were married couples living together, 13.4% had a female householder with no husband present, and 34.4% were non-families. 30.9% of all households were made up of individuals and 12.6% had someone living alone who was 65 years of age or older. The average household size was 2.45 and the average family size was 3.06.

All content from Kiddle encyclopedia articles (including the article images and facts) can be freely used under Attribution-ShareAlike license, unless stated otherwise. Cite this article:
Magdalena, New Mexico Facts for Kids. Kiddle Encyclopedia.