The Magdalena Ridge Observatory (MRO) is an astronomical observatory in Socorro County, New Mexico, about 32 kilometers (20 mi) west of the town of Socorro. The observatory is located in the Magdalena Mountains near the summit of South Baldy Mountain, adjacent to the Langmuir Laboratory for Atmospheric Research. Currently operational at the site (since 2008) is a 2.4-meter fast-tracking optical telescope, and under construction is a ten-element optical interferometer.

The MRO Interferometer is an international scientific collaboration between New Mexico Institute of Mining and Technology (New Mexico Tech – NMT) and the Cavendish Astrophysics Group of University of Cambridge. The project is principally funded by the United States Naval Research Laboratory (NRL), which also supports the Navy Optical Interferometer near Flagstaff, Arizona. NRL is part of the Office of Naval Research. New Mexico State University, New Mexico Highlands University, the University of Puerto Rico, and Los Alamos National Laboratory were originally partners, but have since withdrawn.

The MRO 2.4-meter (7.9 ft) telescope is a Nasmyth design on an azimuth-elevation (az-el) mount. The telescope is capable of slew rates of 10 degrees per second, enabling it to observe artificial objects in low Earth orbit. The telescope is also used for asteroid studies and observations of other solar system objects. The MRO 2.4-meter achieved first light on October 31, 2006, and began regular operations on September 1, 2008, after a commissioning phase that included tracking near-Earth asteroid 2007 WD5 for NASA.

The telescope's primary mirror has a complicated history. It was built by Itek as part of a competition for the contract for the Hubble mirror (although it has a different prescription than the one used to construct the Hubble). When Perkin-Elmer was chosen instead as the Hubble contractor, the mirror was passed to a classified Air Force project. When this project was in turn discontinued, the mirror was transferred to the Magdalena Ridge Observatory, along with a blank for the secondary.

As of May 2008, the facility is under a multi-year contract with NASA to provide follow-up astrometry and characterization data on near-Earth asteroids and comets as part of Spaceguard, and also collaborates with the Air Force to track and characterize satellites in GEO and LEO orbits. On October 9, 2009, New Mexico Tech scientists used instruments on the MRO 2.4-meter and at the Etscorn Campus Observatory to observe controlled impacts of two NASA Centaur rockets at the southern polar region of the moon as part of the LCROSS Project.

On October 23, 2015, it was announced that the MRO telescope will receive funding from the Federal Aviation Administration (FAA) in early 2016 to monitor the launch and re-entry of commercial space vehicles from Spaceport America. 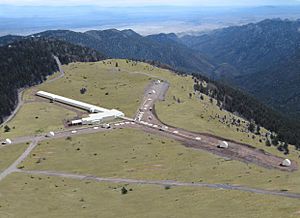 Artist's conception of the MROI array

The Magdalena Ridge Optical Interferometer (MROI) is an optical and near infrared interferometer under construction at MRO. When the MROI is completed, it will have ten 1.4 m (55 in) telescopes located on three 340 m (1,120 ft) arms. Each arm will have nine stations where the telescopes can be positioned, and one telescope can be positioned at the center. The telescopes and their enclosures will be moved with a customized crane. Light from the telescopes' primary mirrors will be directed along the arms to the Beam Combining Facility (BCF). These pipes will be evacuated of all air in order to reduce distortions. Inside the BCF, the light will first travel through extensions of the pipes in the Delay Line Area, which will bring the light beams into phase. Then light will exit the vacuum pipes in the Beam Combining Area (BCA), where the light will be directed into one of three permanent sensors, or to a temporary instrument on a fourth table. The light will strike a total of eleven mirrors before entering a sensor.

The MROI was designed with three research areas in mind: star and planet formation, stellar accretion and mass loss, and active galactic nuclei. An interferometer was selected because such devices can be built with higher resolving power than single-mirror telescopes, enabling them to image distant objects in greater detail. However, they do not provide more light-gathering capacity, as the total area of the mirrors is usually small.

On October 19, 2015, New Mexico Tech signed a five-year, $25 million cooperative agreement with the Air Force Research Laboratory to support continued development of the interferometer at the observatory. Dr. Van Romero, Vice President of Research at Tech, said the new funding will allow the completion of three telescopes, mounts and enclosures on the mountaintop facility.

The New Mexico Exoplanet Spectroscopic Survey Instrument (NESSI) is a ground-based instrument specifically designed to study the atmospheres of exoplanets. The $3.5 million instrument is the first purpose-built device for the analysis of exoplanet atmospheres, and is expected to have a powerful impact on the field of exoplanet characterization.

The Principal Investigator is Michele Creech-Eakman at the New Mexico Institute of Mining and Technology, working with seven co-investigators. The NESSI instrument was mounted on the observatory's 2.4 meter telescope. The instrument's first exoplanet observations began in April 2014.

All content from Kiddle encyclopedia articles (including the article images and facts) can be freely used under Attribution-ShareAlike license, unless stated otherwise. Cite this article:
Magdalena Ridge Observatory Facts for Kids. Kiddle Encyclopedia.