Magee is a city in Simpson County, Mississippi, United States. The population was estimated to be near 5,019 as of February 2007. It is part of the Jackson Metropolitan Statistical Area.

The first white settlers in the area were Arthur Mangum and Phil Magee, both of whom entered the area around 1820. Pioneers from Virginia and the Carolinas followed. The town of Magee was once named Mangum, named after Arthur Mangum and it was named Mangum until 1859. In 1840, Willis Magee built a grist mill on Little Goodwater Creek, inside the present city limits. On February 25, 1900, the community was incorporated as a village, with a population of 685 in 1910. The Magee Public School mascot is the Trojan. Magee's zip code is 39111.

Windham's Restaurant is located in Magee, locally known as "Zip's". In 2015, it was voted as serving the best hamburger in Mississippi.

According to the United States Census Bureau, the city has a total area of 4.9 square miles (13 km2), all land. Magee is located between Jackson and Hattiesburg on U.S. Highway 49 at the intersection of three Mississippi Highways: 541, 545, and 28. 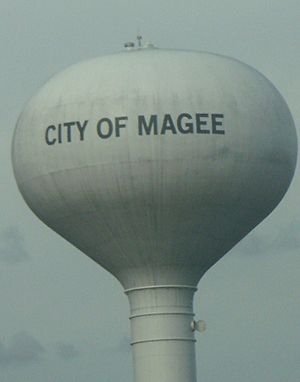 Magee has a humid subtropical climate, with an annual mean temperature 65.8 degrees and average annual rainfall of 56.9 inches (1,450 mm).

On March 26, 2009, around 1:30 a.m., an EF3 tornado struck the north part of the city. The tornado destroyed 60 homes and 25 injuries occurred, with no fatalities. The tornado significantly damaged the town's water treatment plant, interrupting service to the entire town. Circuit Riders and other technicians from the Mississippi Rural Water Association worked with the city staff, local contractors and the Mississippi Emergency Management Agency to restore water service. Using four MEMA generators, the rural water staff was able to restore service to Magee by 2:20 p.m. the next day. 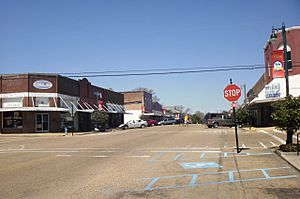 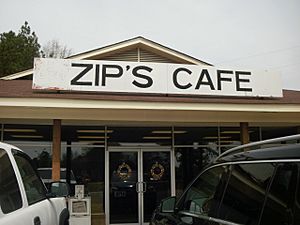 There were 1,573 households out of which 29.9% had children under the age of 18 living with them, 39.6% were married couples living together, 18.8% had a female householder with no husband present, and 37.4% were non-families. 33.4% of all households were made up of individuals and 14.9% had someone living alone who was 65 years of age or older. The average household size was 2.37 and the average family size was 3.02.

Magee has a modern auditorium and local arts group include Artists Mississippi, the Simpson County Arts Council, and the Lamplight Theatre.

The Chamber of Commerce sponsors the annual Homecoming, the Christmas Parade, tree lighting and caroling.

Crazy Day comes once a year located on main street in Magee. It usually comes the third Saturday of the month September. Many locals go there to set up booths to sell homemade goods. Crazy day is all about people coming together and having a good time.

A new modern Civic Center provides space for meetings for civic clubs and other organizations and houses the Magee Chamber of Commerce office. The Civic Center has complete modern kitchen facilities and was built by the city with financial help from various individuals and organizations.

Magee Public Library, the first public library in Magee, was established in 1935 through the interest of business and professional people in the town. Mrs. Maude Turner was librarian. In 1937, the library was named Mims Williams Memorial Library. The library is now a member of the Central Mississippi Regional Library System. The new library was built in 1975. It is staffed by two full-time workers and one part-time worker. The Old Magee Cemetery is the burial place of some of Magee's earliest settlers.

The Sanatorium Museum, a museum of memorabilia from the old tuberculosis hospital, includes the old telephone switchboard, a patient bedroom with nightstand, equipment and many photographs, located on Highway 49 North two miles (3 km) north of Magee, in Sanatorium, Mississippi.

All content from Kiddle encyclopedia articles (including the article images and facts) can be freely used under Attribution-ShareAlike license, unless stated otherwise. Cite this article:
Magee, Mississippi Facts for Kids. Kiddle Encyclopedia.