The Majestic is a historic riverboat that is moored on the Ohio River at New Richmond, Ohio. Built in 1923, she was the last floating theater to be built in the United States, and one of its longest-lived. Declared a National Historic Landmark on December 20, 1989.

Majestic is moored on the Ohio River at New Richmond, Ohio. She is 135 feet (41 m) long, with a beam of 40 feet (12 m) and a draft depth of 5.9 feet (1.8 m). Her wooden hull has been sheathed inside a steel one, and is still visible from within the boat. Its superstructure housing the theater has been little altered since 1969.

The last of the original traveling showboats, Majestic was built in 1923 in Pittsburgh, and plied the Ohio River and other portions of its watershed for many years, offering shows at towns along the way. She came as a pair with a tugboat the Attaboy which towed her from venue to venue. Tom Reynolds and his family owned, lived on and ran it until 1959. Reynolds himself was born into an old established showboat family. Tom Reynolds first boat was the Illinois, lost to fire in 1916, which he replaced by building the America.

From 1945 to 1959 there was an academic alliance between the Reynolds family and Hiram College, Kent State University, and Indiana University that allowed the schools to present summer theater experiences for students on Majestic. In December 2014, longtime drama professor, Tom Weatherston, produced a documentary about the alliance and life on the showboat.

Capt. Tom Reynolds sold the Majestic in August 1959 for $30,000 to the Indiana University. He had piloted the Majestic on the Ohio, Kansas, Mississippi and Kanawha Rivers for 36 years. That December he was working on the tug Attaboy, moored alongside the Majestic, when it is thought the tug's engine kicked back, and Reynolds lost his footing and fell into the Kanawha river and drowned. He was 71 and had lived on or beside the river his whole life.

She was forced into dry dock in 1965 by the Safety at Sea Act, which prohibited wooden-hulled vessels from transporting cast and crew on overnight journeys, though by that time the condition of her hull was fast deteriorating. The outer steel hull was added at that time, as were other modernizing conveniences, including air conditioning. While in dry dock, the City of Cincinnati purchased Majestic for $13,500 as part of its downtown Cincinnati Central Riverfront show case. She was docked at the Cincinnati Public Landing and cared for by the cast and crew of Cincinnati Landmark Productions, captained by Tim Perrino for 23 years, until March 2019. 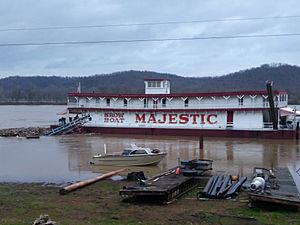 Flooding of the Ohio River on February 13, 2020 batters the Majestic 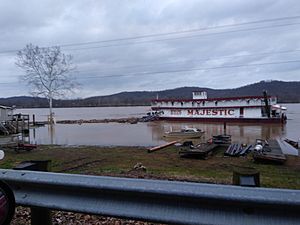 Flooding of the Ohio River on February 13, 2020 batters the Majestic

She was purchased in a public auction for over $100K even though it is valued at much less, by Joe and Cortnee Brumley. In December 2019, she will once again be open to the public for public performing art events with the production of "The Majestic Christmas," her first public event since being acquired by from the City of Cincinnati and moved to Manchester, Ohio.

On December 11, 2020, The Ledger Independent reported that the owners are considering docking her in Maysville, Kentucky at Limestone Landing, a riverfront landing in a designated entertainment destination known as The Landing at Limestone quarter of Maysville, after discussions with Augusta, Kentucky broke down. In a special meeting of the city council on December 17, 2020, Maysville City Commissioners learned that Joe Brumley had acquired 100% ownership of the Majestic and had formed a 501 3c non-profit to operate the showboat but the board of directors had been dissolved due to lack of communication. The city commission, although was in support of the move, deferred permitting and entering into a lease with Brumley until its non-profit status was resolved and the city knew who it was entering a lease with. Brumley was concerned that the showboat be moved as quickly as possible to prevent damaged from Ohio River floods. The showboat was battered with debris during major flooding in early 2020. Brumley claimed that being moored in Manchester is not economically sustainable since the historic winery and tourist attraction, The Moyer Winery, burned down in 2019. On February 11, 2021, multiple newspapers reported that New Richmond, Ohio's Village Administrator Greg Roberts said the New Richmond Village Council gave the go-ahead for the showboat to moor at its riverfront. Roberts said negotiations had taken less than a week after Brumley telephoned the village. The Ledger Independent reported that Maysville's officials were blindsided by the news, with Maysville City Manager Matt Wallingford saying Brumley had stopped responding to emails for about a month. On February 17, 2021, the Majestic left Manchester and arrived to its new dock in New Richmond, Ohio as part of the villages Designated Outdoor Refreshment Area (DORA), an economic tourist area where persons over 21 can possess and consume alcohol along the Ohio River.

All content from Kiddle encyclopedia articles (including the article images and facts) can be freely used under Attribution-ShareAlike license, unless stated otherwise. Cite this article:
Majestic (riverboat) Facts for Kids. Kiddle Encyclopedia.