The Mangapu River is a river of the Waikato region of New Zealand's North Island. It has its sources in numerous streams which flow generally northwards from the King Country south of Te Kuiti, the longest of which is the Mangaokewa Stream. These streams join to form the Mangapu close to Te Kuiti, and from here the river flows north, passing close to the east of Waitomo Caves, where the Mangapu caves have the largest entrance in the North Island (about 100 m (330 ft) long and 90 m (300 ft) deep), before flowing into the Waipa River at Otorohanga.

The New Zealand Ministry for Culture and Heritage gives a translation of "double stream" for Mangapū.

The river at Otorohanga is classed as being in the worst 25% of similar sites as regards all measured pollutants, though some attempts are being made at restoration. 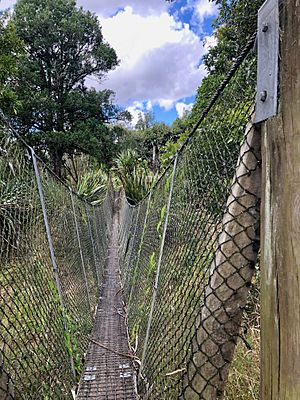 The reserve 18.5 ha (46 acres) of kahikatea forest on the east bank of the river, was purchased by the Native Forests Restoration Trust in 2001. Kahikatea forest once covered 41,000 ha (100,000 acres) in the Waipa Ecological District, now reduced to 158 ha (390 acres), of which 52 ha (130 acres) are in the Mangapu valley, though over 70 ha (170 acres) has been felled since 1975. A major drainage scheme was carried out just upstream from the reserve in the 1930s, including emptying of a lake. The forest floods in winter and flood protection would be uneconomic. Some kahikatea in the reserve are about 120 years old. The reserve also has swamp maire, matai, titoki and pukatea. Te Araroa long distance walkway passes through the reserve and crosses the river on a suspension bridge.

All content from Kiddle encyclopedia articles (including the article images and facts) can be freely used under Attribution-ShareAlike license, unless stated otherwise. Cite this article:
Mangapu River Facts for Kids. Kiddle Encyclopedia.