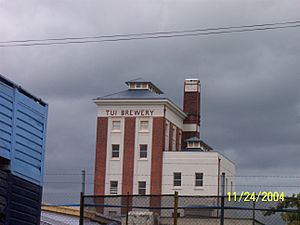 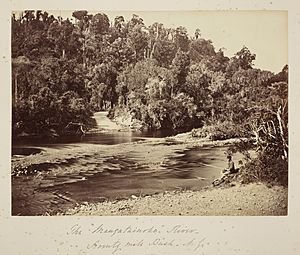 The Mangatainoka River is a river that flows in the Tararua District of New Zealand's North Island. Its water considered so pure a well-known brewery was established there.

Its headwaters are on the eastern side of the Tararua Range to the southwest of the town of Eketahuna, and it roughly parallels the Wairarapa Line railway and State Highway 2 through the Tararua District before meeting the Tiraumea River just before its confluence with the Manawatu River just south of Woodville. The railway's 162-metre (531 ft) bridge across the river between Newman and Hukanui is the longest on the entire line. and further to the north, the small settlement of Mangatainoka sits on the river's banks north of Pahiatua.

The New Zealand Ministry for Culture and Heritage gives a translation of "native broom stream" for Mangatainoka.

Prior to European settlement of New Zealand, the shallow river was thickly lined with matai, rimu, and totara trees that prevented serious flooding to the swampy lands alongside the river. However, large-scale removal of the forest and drainage of the fertile land for agriculture has caused the river to flow faster, deepening its channel, heightening erosion, and encouraging it to meander to try to return to its slower pace. This has resulted in devastating floods, including one in October 2000 that caused at least NZ$200,000-300,000 of damage to the regional council's scheme to stabilise the river and rehabilitate its environment.

The river is popular for fishing, especially for trout. Approximately 50 kilometres (31 mi) of the river is fishable, and due to its proximity to State Highway 2 and major northern Wairarapa towns, access is easy.

All content from Kiddle encyclopedia articles (including the article images and facts) can be freely used under Attribution-ShareAlike license, unless stated otherwise. Cite this article:
Mangatainoka River Facts for Kids. Kiddle Encyclopedia.