Mapleton is an unincorporated community in Lane County, Oregon, United States. It is located on Oregon Route 126 and the Siuslaw River, 45 miles (72 km) west of Eugene and 15 miles (24 km) east of Florence. It is also the western terminus of Oregon Route 36. As of the 2000 census, Mapleton had a total population of 918.

Mapleton was likely named by Julia Ann "Grandma" Bean for the abundance of Bigleaf Maple trees in the area. Grandma Bean's husband was Obediah Roberts Bean, and their eldest child was judge Robert S. Bean. Pioneers of 1852, the Beans moved to the Mapleton area in 1886 and the town was named shortly thereafter. There was a post office called Seaton established north of the locality in 1885, and when it moved to the Mapleton area in 1889, Mrs. Bean became postmaster. The post office was renamed Mapleton to match the town in 1896.

This region experiences warm (but not hot) and dry summers, with no average monthly temperatures above 71.6 °F. According to the Köppen Climate Classification system, Mapleton has a warm-summer Mediterranean climate, abbreviated "Csb" on climate maps. 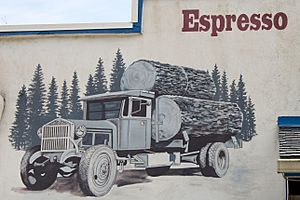 All content from Kiddle encyclopedia articles (including the article images and facts) can be freely used under Attribution-ShareAlike license, unless stated otherwise. Cite this article:
Mapleton, Oregon Facts for Kids. Kiddle Encyclopedia.