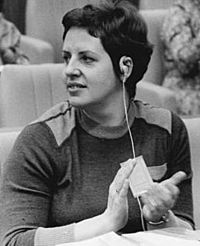 Margitta Gummel (née Helmbold, 29 June 1941 – 26 January 2021) was a German Olympic shot putter. She competed for the Unified German team in the 1964 Summer Olympics. She also participated at the 1972 Summer Olympics.

Gummel had a long rivalry with Nadezhda Chizhova of the Soviet Union. She won an Olympic gold medal in 1964 and a silver medal in 1972. Gummel was born in Magdeburg, Nazi Germany. She won two silver medals (1966, 1969) and a bronze medal (1971) at the European Athletics Championships.

All content from Kiddle encyclopedia articles (including the article images and facts) can be freely used under Attribution-ShareAlike license, unless stated otherwise. Cite this article:
Margitta Gummel Facts for Kids. Kiddle Encyclopedia.