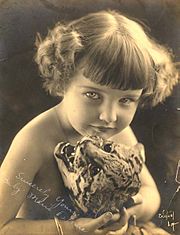 Osborne was born on November 5, 1911 in Denver, Colorado. She was raised in Long Beach, California. Osborne was married to Frank J. Dempsey from 1931 until they divorced in 1936. They had one daughter, Joan. Then she was married to Murray F. Yates from 1945 until his death in 1975. Osborne died on November 11, 2010 in her home in San Clemente, California from natural causes, aged 99.

All content from Kiddle encyclopedia articles (including the article images and facts) can be freely used under Attribution-ShareAlike license, unless stated otherwise. Cite this article:
Marie Osborne Facts for Kids. Kiddle Encyclopedia.