Kids Encyclopedia Facts
This page is about the mammal park in Napier. For other uses, see Marineland.

Marineland of New Zealand was a marine mammal park in Napier, New Zealand. The park opened in 1965 and closed to the public in 2008. It has had several species of native marine wildlife, including the common dolphin, the New Zealand fur seal, little blue penguin and gannets. Marineland also has California sea lions, a sulphur crested cockatoo, otters and more. 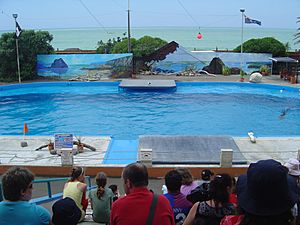 The main tank at Marineland which was completed in January 1965

The history of Marineland began in 1964 when an Auckland architectural firm was commissioned by Napier City under mayor Peter Tait to design an aquarium and dolphin pool. In late January 1965 Marineland caught its first common dolphin, Daphne, and the facility opened two days later. In 1969 two dolphins died when vandals broke in and fed them nails.

By the end of the 1960s the site had exhibited dusky dolphins, California sea lions, leopard seals and New Zealand fur seals.

A new grandstand was built and Marineland saw yellow-eyed penguins and little blue penguins lay eggs for the first time including some successful hatchings.

A New Zealand Lotteries Commission grant was given for a new Marine Education Centre in 1991 and one year later a "Swim With Dolphins" programme began. In 1996 vandals broke into the site for a second time. Redevelopments of many areas and accommodations for animals at the site took place.

Closes to the public in September 2008 when Kelly the last remaining dolphin dies.

Marineland is transferred to National Aquarium of New Zealand.

In September 2013, Napier City Council announced that Marineland was to be demolished and replaced with a Skatepark. 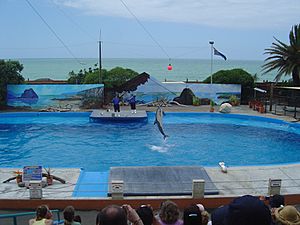 Kelly the common dolphin performing a spinning trick during a show 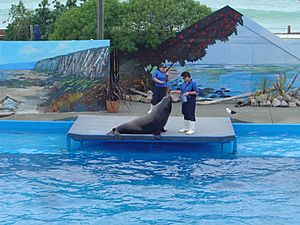 A male California sea lion during a performance 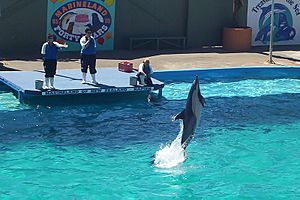 The final manager of Napier's Marineland, Gary Macdonald, resigned on 18 November 2009 after 32 years at Marineland after investigations found he falsified documentation to keep wild animals illegally.

"What I did was totally wrong & I should've been informing DOC of exactly what I was doing," said Mr Macdonald in live statements after the investigation. Investigations into the council-owned tourist attraction were started by The Department of Conservation about the false paperwork on 11 November 2009.

Napier City Council chief executive of the time Neil Taylor explained the investigations showed three or more wild seal pups were documented as being born in Marineland, enabling the facility to keep them rather than release the animals back to the wild.

The council probe revealed false declarations were filed in 1996, 2006, and 2007, stating in all cases that the pups had arrived malnourished, harassed, or at risk for treatment.

Marineland has been closed since April 2008 while the council decides the future of the facility.

DOC completed an investigation but decided against prosecution of Marineland, satisfied with Mr Macdonald's resignation.

All content from Kiddle encyclopedia articles (including the article images and facts) can be freely used under Attribution-ShareAlike license, unless stated otherwise. Cite this article:
Marineland of New Zealand Facts for Kids. Kiddle Encyclopedia.