Kids Encyclopedia Facts
In this article, the patronymic is Nazarivna and the family name is Yaremchuk.

Mariya Nazarivna Yaremchuk (Ukrainian: Марія Назарівна Яремчук; born 2 March 1993), also transliterated as Maria Yaremchuk, is a Ukrainian singer and actress. Yaremchuk represented Ukraine in the Eurovision Song Contest 2014 held in Copenhagen, Denmark. She finished the 6th in the grand final out of 26 countries.

Yaremchuk was born in Chernivtsi and is the daughter of People's Artist of Ukraine and singer, musician Nazariy Yaremchuk and his second wife Darina. Mariya was named after her paternal grandmother. Yaremchuk's father died of stomach cancer when she was two years old. Friends and family have stated that Mariya was very dear to her well-known father.

"My mother told me that my father liked to take my pillow with him on tour. He never parted with it. And when he came from America, where he was being treated for cancer, he bought a camera. He filmed how we lived. At the age of 16, I found the recordings in the attic. Before that, I knew about my dad that he was a legend of Ukrainian pop music. And in the pictures, I saw a sensitive and beautiful man. And a handsome man. I have never met such men. "

Yaremchuk has an older half-sister Vera from her mother's first marriage and two brothers by her father's side, Dmytro and Nazariy. People's Artist and Hero of Ukraine Vasyl Zinkevych is her godfather.

Yaremchuk considers herself an apolitical person, but in December 2013 she declared that she "in the elections and in general, morally, and as a singer" supported (the political party) Party of Regions.

Yaremchuk was a finalist of the TV project Holos Krayiny. She reached fourth place. In 2012, she represented Ukraine at the international contest of young singers New Wave 2012, where she came in third. Yaremchuk was sponsored by Rinat Akhmetov during this festival. Akhmetov is friends with, one of the organizers of New Wave, Igor Krutoy. Mariya also participated in Evrobachennya 2013 – Natsionalyni vidbir, the national final used for finding Ukraine's representative in the Eurovision Song Contest, where Mariya came fifth with the song "Imagine". 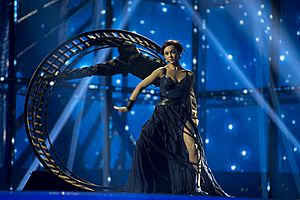 Yaremchuk at the 2014 Eurovision Song Contest.

During her Eurovision participation, Yaremchuk received a lot of international media attention due to her being the Ukrainian representative in a contest with Russia in the wake of the Crimean Crisis. At the #HappyWall in Copenhagen, Yaremchuk wrote "Proud to be Ukrainian".

In March 2018, The Legend of Carpathians (Ukrainian: Легенда Карпат) was premiered at the 70th Cannes Film Festival. In this film, Yaremchuk portrayed Marichka, the lover of folklore hero Oleksa Dovbush.

In early 2018, Yaremchuk's manager announced that the singer is going on an indefinite hiatus.

"I will still sing, but I am taking a time-out and I am closing the project Mariya Yaremchuk. Consciously, now understanding myself. I don't see the point in singing the music I sang, in the name I used to wear. It's hard to leave a fortune. Eurovision, all those clips are a lot. It's hard to say "bye-bye" to everything and destroy everything. I was afraid. I had been taking the move for a whole year - it's not impulsive, it's not an emotion. This is a conscious decision."

Since then, she did not release any material, nor appeared at concerts and on television programmes. Yaremchuk stopped updating her social media pages in May 2018, but returned shortly in June 2020 to post two Instagram posts to promote Netflix's film Eurovision Song Contest: The Story of Fire Saga, which was partially inspired by her Eurovision 2014 stage performance.

Yaremchuk identifies as Hutsul. As of 2021, she resides in Lviv.

All content from Kiddle encyclopedia articles (including the article images and facts) can be freely used under Attribution-ShareAlike license, unless stated otherwise. Cite this article:
Mariya Yaremchuk Facts for Kids. Kiddle Encyclopedia.