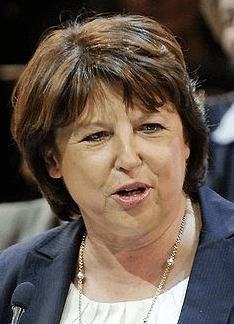 Martine Aubry, during an election campaign in 2010

Martine Aubry (born 8 August 1950) is a French politician. She was born in Paris and is the daughter of Jacques Delors (born 1925).

Aubry was married to Xavier Aubry, and has a daughter from that marriage. In 2004, she married Jean-Louis Brochen, a French lawyer, but decided to keep the family name of her first marriage. Aubry studied economics in Paris. She also has diplomas in political sciences, social sciences and work. She has also studied at the École nationale d'administration. She became active in the Confédération française démocratique du travail, which is currently the biggest trade union of the country.

She is the mayor of Lille since 2001 and the First Secretary of the Socialist Party since 2008. She wanted to be the Socialist candidate to the 2012 presidential election but François Hollande defeated her.

All content from Kiddle encyclopedia articles (including the article images and facts) can be freely used under Attribution-ShareAlike license, unless stated otherwise. Cite this article:
Martine Aubry Facts for Kids. Kiddle Encyclopedia.