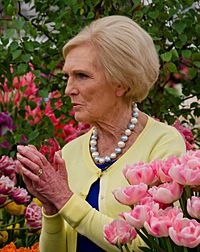 She has published more than 75 cookery books, including her best-selling Baking Bible in 2009. Her first book was The Hamlyn All Colour Cookbook in 1970.

She hosted several television series for the BBC and Thames Television. Berry has appeared on Woman's Hour and Saturday Kitchen. She was a judge on the BBC One (originally BBC Two) television programme The Great British Bake Off from 2010 until 2016.

In 2020, Berry was made a Dame Commander of the Order of the British Empire.

All content from Kiddle encyclopedia articles (including the article images and facts) can be freely used under Attribution-ShareAlike license, unless stated otherwise. Cite this article:
Mary Berry Facts for Kids. Kiddle Encyclopedia.