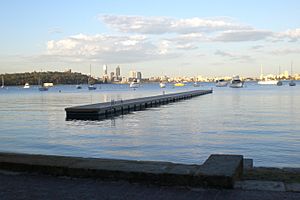 Matilda bay towards the city

Matilda Bay or Crawley Bay (known originally as Currie's Bay), then Sutherland's Bay) is a natural bay in the Swan River in Western Australia, adjacent to the Perth suburb of Crawley. It extends from Pelican Point to Mounts Bay Road below Kings Park.

A well-known bronze sculpture that is located at the site of the former Crawley Baths – Eliza is displayed just offshore from Mounts Bay Road and depicts a woman preparing to dive.

Matilda Bay Reserve is a recreational parkland between Hackett Drive and the river. It includes Pelican Point, which is an important breeding sanctuary for migratory birds.

Matilda Bay is believed to have been named after the wife of John Septimus Roe, Matilda (née Bennett). 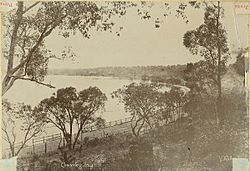 Captain Currie was the first colonial owner of the 32-acre (130,000 m2) estate surrounding the bay, at that time known as Currie's Bay. Pelican Point was then known as Point Currie. The estate was sold in 1832 to the Assistant Surveyor and Colonial Treasurer, Henry Charles Sutherland for £100. Sutherland named the property Crawley Park after his mother's maiden name and the bay became known as Sutherland's Bay. In 1876 Crawley Park was sold to Sir George Shenton, and the bay was known generally as Crawley Bay. After Shenton's death in 1909, the estate was acquired by the Government in 1910 and vested in the University of Western Australia in 1912.

The US Navy had a fleet of Catalina flying boats based at Matilda Bay during World War II.

In 1943, Qantas operated five Catalina flying boats between Ceylon (now Sri Lanka) and Matilda Bay in what was known as the Double Sunrise service.

All content from Kiddle encyclopedia articles (including the article images and facts) can be freely used under Attribution-ShareAlike license, unless stated otherwise. Cite this article:
Matilda Bay Facts for Kids. Kiddle Encyclopedia.