Matthew Robert Smith (born 28 October 1982) is an English stage and television actor. He is best known as the eleventh form of the Doctor on the British television series Doctor Who. He got a BAFTA Award nomination for the role in 2011.

He wanted to be a professional footballer. A back injury made him stop playing the sport. He joined the National Youth Theatre and studied Drama and Creative Writing at the University of East Anglia. Smith became an actor in 2003. He performed in plays like Murder in the Cathedral, Fresh Kills, The History Boys and On the Shore of the Wide World in London theatres. On West End, he has performed in Swimming with Sharks with Christian Slater, and That Face.

Smith's first television role was in 2006. He played Jim Taylor in the BBC version of Phillip Pullman's The Ruby in the Smoke and The Shadow in the North. His his first major role in television came as Danny in the 2007 BBC series Party Animals. Smith is the youngest person to play the character in the British television series.

Smith was born and brought up in Northampton. He attended Northampton School for Boys. He planned to be a professional football player. Smith had played for the youth teams of Northampton Town F.C., Nottingham Forest F.C. and Leicester City F.C. After an injury, he began to study acting. After school, Smith studied Drama and Creative Writing at the University of East Anglia.

While acting in On the Shore of the Wide World, the play moved to the Royal National Theatre in London. After finishing, he took on the role of Lockwood in the Alan Bennett play The History Boys. After The History Boys, he acted in Burn/Chatroom/Citizenship and Swimming with Sharks. ""Swimming with Sharks was his first West End play. His first television role was as Jim Taylor in the BBC version of the Sally Lockhart series of books The Ruby in the Smoke and The Shadow in the North. He acted along with Billie Piper in the series. He acted with Piper a third time in an episode of Secret Diary of a Call Girl. Piper is well known for playing the part of Rose Tyler on Doctor Who. 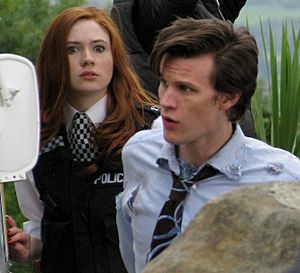 "The Doctor is a very special part, and it takes a very special actor to play him. You need to be old and young at the same time, a boffin and an action hero, a cheeky schoolboy and the wise old man of the universe. As soon as Matt walked through the door, and blew us away with a bold and brand new take on the Time Lord, we knew we had our man."

Smith was revealed as the Eleventh Doctor in the British science-fiction television series Doctor Who in January 2009 to replace David Tennant, who announced his departure in October 2008. Smith was not as well known as many of the actors who were thought to be likely to get the part. These included Paterson Joseph, David Morrissey, Sean Pertwee, James Nesbitt, Russell Tovey, Catherine Zeta Jones, Chiwetel Ejiofor, Robert Carlyle and Billie Piper.

Smith was one of the first actors to audition for the role. Producer Steven Moffat and BBC Wales Head of Drama and executive producer, Piers Wenger immediately liked him for the part. Smith had auditioned for the role of John Watson in the Moffat-created Sherlock at the same time. He did not get the part of Watson because Moffat believed his acting style was closer to Sherlock Holmes but they had already cast Benedict Cumberbatch as Holmes. At 26 years old, Smith was three years younger than Peter Davison was at the time of his casting as the Doctor in 1981. He was younger than any other actor suggested for the role. After three weeks of auditions, Moffat and Wenger agreed that it had "always been Matt". The BBC were was not certain that a 26-year-old could not play the Doctor correctly. Some fans of the show believed that Smith was too young for the role. Others supported him based on what he had shows of his acting ability. For his work in his first series he was nominated in the "Outstanding Drama Performance Category" of the National Television Awards.

In June 2010, he appeared on stage with Orbital. They performed a version of the Doctor Who theme at the Glastonbury Festival. Smith hosted the Doctor Who Prom at the Royal Albert Hall on 24–25 July 2010. In June 2011, the BBC said that Smith had been signed to do fourteen more episodes of Doctor Who as the Doctor.

All content from Kiddle encyclopedia articles (including the article images and facts) can be freely used under Attribution-ShareAlike license, unless stated otherwise. Cite this article:
Matt Smith (actor) Facts for Kids. Kiddle Encyclopedia.