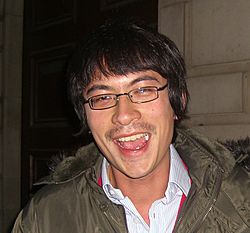 Matthew Chee Hung Tong or Matt Tong (born 29 April 1979), is a British musician. He played the drums for the rock band Bloc Party but currently plays in the band Algiers. He was born in Bournemouth in England, United Kingdom but his parents were originally from England and Malaysia. In 2006, he married Brooke Vermilion.

All content from Kiddle encyclopedia articles (including the article images and facts) can be freely used under Attribution-ShareAlike license, unless stated otherwise. Cite this article:
Matt Tong Facts for Kids. Kiddle Encyclopedia.