Maxwelltown (Scottish Gaelic: Ceann Drochaid) was formerly a burgh of barony and police burgh in the county of Kirkcudbrightshire in south west Scotland. In 1929 Maxwelltown was merged with Dumfries. Map ref.

Maxwelltown lies to the west of the River Nith. The river was formerly the boundary of Kirkcudbrightshire and Dumfriesshire. Maxwelltown was a hamlet known as Bridgend up until 1810, in which year it was made into a burgh of barony under its present name. Maxwelltown comprises several suburbs, including Summerhill, Troqueer, Janefield, Lochside, Lincluden, Sandside, and Summerville. 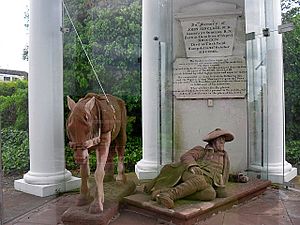 Statue of Old Mortality and his pony (The Sinclair Memorial)

The oldest remaining building within the Dumfries urban area is on the Maxwelltown side of the Nith, Lincluden Abbey. Queen of the South football ground is also on the Maxwelltown side. Some of the most notable local players for the club hail from the same side of the Nith, including Ian Dickson, Billy Houliston and Ted McMinn. Other buildings of note are the former Dumfries Mill, now the Robert Burns Centre Museum, that in the evenings becomes a film theatre; Dumfries Museum and observatory up on the hill; the Sinclair Memorial; the former Benedictine Convent of the Immaculate Conception; Dumfries Prison; and the former Maxwelltown Court House. Maxwelltown railway station in the Summerhill area on the Castle Douglas and Dumfries Railway closed in 1965.

All content from Kiddle encyclopedia articles (including the article images and facts) can be freely used under Attribution-ShareAlike license, unless stated otherwise. Cite this article:
Maxwelltown Facts for Kids. Kiddle Encyclopedia.