May Pang facts for kids 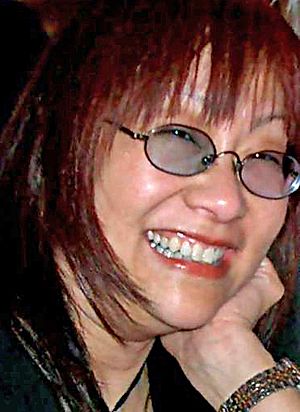 May (Fung-Yee) Pang (born October 24, 1950) was a personal assistant to former Beatle John Lennon and his wife Yoko Ono. She later became Lennon's companion and lover, when he separated from Ono in the mid-1970s. Pang was born in New York, New York to Chinese parents.

Pang was a secretary at ABKCO, a management company started by Allen Klein, in New York City. ABKCO's clients included three of the Beatles: Lennon, George Harrison and Ringo Starr. When Lennon and wife Ono needed an assistant, Pang was sent to England to work for them. She dated musician Peter Ham of Badfinger, and helped Lennon and Ono move to the United States, late in 1971.

During 1973, Lennon and Ono began to have problems in their marriage. Ono trusted Pang, and suggested her as a companion for Lennon, knowing he wanted to see other women. Lennon surprised Ono by taking Pang with him to Los Angeles, where he planned to record an album with Phil Spector. Lennon and Pang lived together for over a year, while he worked on new music, and tried to decide whether to divorce Ono or reconcile with her.

Lennon and Ono decided to reconcile early in 1975, and became the parents of Sean Lennon. Even though Pang had been involved with the marketing of several of Lennon's records, and also records by Harry Nilsson and Ringo Starr, she had a hard time finding a new job. She later found out the reason was because many companies were afraid Lennon would not want to do business with them, if he knew she worked there.

Pang finally found a job with Island Records, and later worked for RKO. She married record producer Tony Visconti (the former husband of singer Mary Hopkin), and they started a family. After Lennon's death in 1980, Pang wrote a memoir, titled Loving John. She also appeared on many talk shows, to discuss her relationship with Lennon.

All content from Kiddle encyclopedia articles (including the article images and facts) can be freely used under Attribution-ShareAlike license, unless stated otherwise. Cite this article:
May Pang Facts for Kids. Kiddle Encyclopedia.