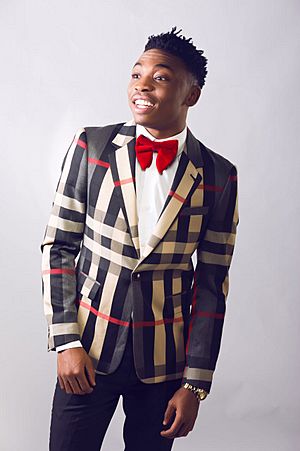 Adewale Mayowa Emmanuel (born 23 March 1994), known professionally as Mayorkun, is a Nigerian singer, songwriter and pianist. He released a cover of Davido's "The Money" single and was discovered by the singer on Twitter. Mayorkun signed with Davido's record label Davido Music Worldwide (DMW) in 2016; his debut single "Eleko" was released under the label. Mayorkun released his debut studio album The Mayor of Lagos in November 2018.

All content from Kiddle encyclopedia articles (including the article images and facts) can be freely used under Attribution-ShareAlike license, unless stated otherwise. Cite this article:
Mayorkun Facts for Kids. Kiddle Encyclopedia.