Kids Encyclopedia Facts
For the civil use of this facility after 2001, see Sacramento McClellan Airport. 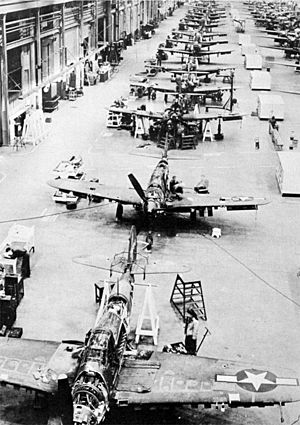 Bell P-39 Repair Line.
To step up its delivery of Speedy Bell P-39 "Airacobra" fighter airplanes to American pilots in the South Pacific, the Army Air Forces Air Service Command put American production line methods to work in its repair docks at McClellan Field, California. Two and one-half million dollars worth of airplanes were overhauled by civilian Air Service Command workers at Sacramento, California preparatory to being sent against the enemy. 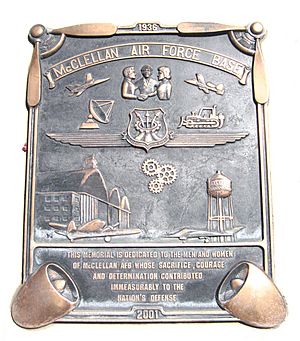 For the vast majority of its operational lifetime, McClellan was a logistics and maintenance facility for a wide variety of military aircraft, equipment and supplies. Initially known as the Pacific Air Depot and Sacramento Air Depot, in 1939 the base was renamed for Major Hezekiah McClellan, a pioneer in arctic aeronautical tests. Born in 1894, he died on 25 May 1936 when his Consolidated P-30 which he was flight testing crashed near Centerville, Ohio.

In 1986, the U.S. Air Force established the McClellan Aviation Museum on what was then McClellan Air Force Base. The museum was later chartered by the National Museum of the United States Air Force.

The United States Coast Guard previously operated Coast Guard Air Station Sacramento at McClellan AFB as a tenant activity, operating and maintaining several HC-130 Hercules aircraft. CGAS Sacramento continues to operate at McClellan following its closure as an Air Force Base and is the only remaining military aviation unit and installation on the airfield.

In 1993, the base was selected by the Pentagon for closure. At first, McClellan was scratched from a list of bases to be closed, but that decision was faced with allegations that the Clinton administration was playing politics. The base was eventually selected for closure, and there were plans to offset the expected loss of $1.5 billion, and 11,000 jobs, to the California economy. The plan relied on privatization and other investment to offset the economic and employment losses. The base is now McClellan Business Park, a growing business enclave that hosts a diverse mix of companies spread across more than 8 million square feet of space of all types. This former military facility is now home to hundreds of private companies, as well as state, federal and local government agencies.

In 2005 the McClellan Aviation Museum changed its name to the Aerospace Museum of California. Various military aircraft sit on display inside one of the hangars, and many more are outside on the flightline. The museum has displays which highlight the mission of the base when it was active, as well as neighboring bases such as Beale AFB, Travis AFB and the since closed Mather AFB. The museum hosts educational programs to schools in the local area.

In 2015 the Sacramento Bee reported that McClellan Airfield had been designated as a Superfund site, because the Environmental Protection Agency has identified 326 waste areas on the base. Water wells closest to the base in the Rio Linda-Elverta district, have had the highest levels of hexavalent chromium, which is a known carcinogen. Water from six of 11 wells tested above the state’s maximum contaminant levels for chromium-6, which is 10 parts per billion.

All content from Kiddle encyclopedia articles (including the article images and facts) can be freely used under Attribution-ShareAlike license, unless stated otherwise. Cite this article:
McClellan Air Force Base Facts for Kids. Kiddle Encyclopedia.